"When the Holy Family fled Bethlehem, Herod's evil became a blessing for Egypt"
Cornelis HulsmanDecember 3, 2001
This article is from the December 3 2001 issue. Subscribers can read all of CT's digital archives.

Every year on January 11 or 12, Dayr Abu Hinnis, a small, isolated Christian village 186 miles south of Cairo, commemorates the Holy Family's flight into Egypt. The celebrations at Dayr Abu Hinnis begin in the early morning hours as Coptic pilgrims ferry across the Nile, singing and clapping joyfully, ahead of the official procession.

Along the East Bank's shoreline, believers position themselves to watch Coptic Orthodox Bishop Demetrius from the nearby town of Malawi cross the Nile in a splendidly decorated felucca, an ancient sailing boat.

A procession with crosses and icons moves through the village proper, past the fifth-century church, ending at Kom Maria, a desolate sand hill just outside the village. At the hill, the faithful pitch a festival tent. According to Coptic tradition, the Holy Family rested on that hill during their flight from Herod's soldiers, who were in hot pursuit.

For the Copts, a group of mostly Orthodox Christians in Egypt, the arrival of Joseph, Mary, and the newborn Jesus is Egypt's great moment in the gospel story. What Herod intended for evil in slaughtering Bethlehem's children, which Jesus narrowly escaped, God turned into a blessing for all Egypt.

In the cave church of Dayr Abu Hinnis, sixth-century paintings tell the story of the flight into Egypt from the narrative in Matthew 2: The Magi ask King Herod, "Where is the one who has been born king of the Jews?"

Herod, fearful of a potential rival, urges the Magi to inform him where to find the young king, "so that I too may go and worship him." But God exposes Herod's evil plans. The Magi, warned in a dream, return to their own country without informing him.

An angel in a dream warns Joseph of Herod's malicious intent. "Arise!" the ... 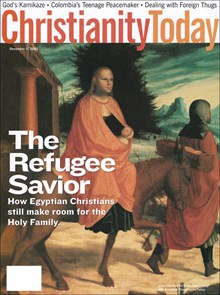 This article is from the December 3, 2001 print issue. Subscribe to continue reading.