His closest companion reflects on the meaning of Bonhoeffer's life for us today.
Eberhard Bethge

A man destined to fail, hanged as a 39-year-old, has now deeply influenced—perhaps troubled—Christianity for half a century.

The career in theology for which Dietrich Bonhoeffer was prepared opened with highly specialized works (The Communion of Saints and Act and Being). But then came books addressed to insiders of the church, who, like he, were fighting on the losing side in Germany (The Cost of Discipleship). Later, the Nazis prohibited Dietrich from speaking, printing, and writing. During this time only fragments of manuscripts, sometimes hardly decipherable, emerged (Ethics and Letters and Papers from Prison).

This led to mediating the entire Bonhoeffer literary inheritance. The work almost became the primary occupation of the second half of my life.

Today about forty people are working to edit all of his writings into sixteen volumes. Already six volumes are on the market (at a price too high for most people’s pocketbooks), and the English edition is in the works. Introductions, commentaries, and painfully precise evidences by experts!

Toning Down His Significance? 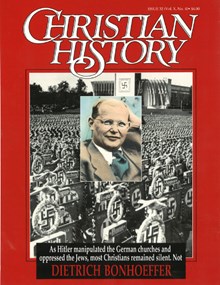