Reforming doctrine was just the beginning of a vigorous campaign to restructure Christian life—at church, at home, and in each believer's heart.
Raymond A. Mentzer

On Friday morning, March 31, 1542, the wife of sheath-maker Louis Pyaget appeared before the Geneva consistory to make an account of her faith. According to records, she "[s]aid she has a daughter who knows her faith better than she, and she did not know it except in Latin as in former times, and in the French language she could not say her creed; in Latin in a general way. And she does not know it in another language and does not understand it otherwise, and as for the sermons she has not frequented them."

What was the meaning of the Reformation for ordinary, largely illiterate men and women in France and nearby city-states such as Geneva? How do we interpret the plight of a distraught woman who, like Madame Pyaget, was raised Catholic and admitted that she was unable to "comprehend anything, no matter how much they instructed her" in the new religion and its practices? In what ways did the Protestant innovations seek to transform her daily life?

The Huguenots restructured ritual and ecclesiastical institutions in order to teach the essentials of Christian doctrine and nurture proper conduct. While people's receptivity varied, church leaders tenaciously pursued a broad reform of everyday behavior and lifestyle, which, in their minds, completed the reform of theology.

The Reformed churches labored to convey the truths of Christianity primarily through sermon services and catechism lessons. The congregation gathered each week for the Sunday morning sermon, focusing on God's truth as contained in Scripture and Scripture alone.

Scott M. Manetsch
Next Article
Reformation on the Run 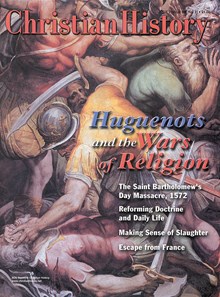