The ongoing dispute between Southwestern and its former president reflects a larger rift over his place in the denomination.
David Roach|June 4, 2021 08:00 AM 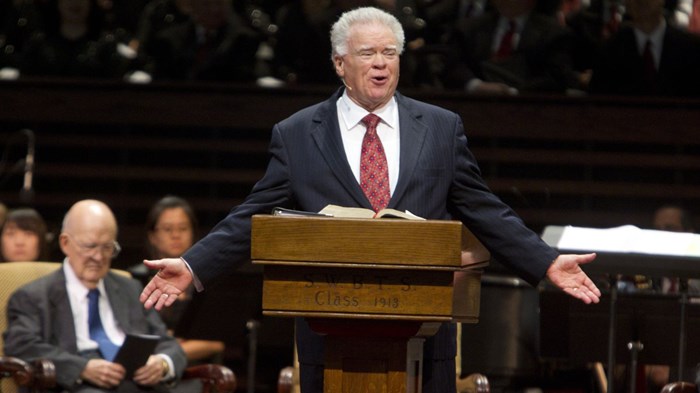 The recent publication of the 2021 Southern Baptist Convention (SBC) Book of Reports has reignited a public dispute between Southwestern Baptist Theological Seminary and its former president Paige Patterson.

Both sides cite the dispute as a test of the convention’s commitment to truth and a harbinger of its future direction.

The report comes three months after the seminary settled a lawsuit against a foundation that shifted millions in funding following Patterson’s departure.

“Southern Baptists have a right to know these facts and deserve the truth,” said Colby Adams, the seminary’s vice president for strategic initiatives and chief of staff.

Patterson has denied the claims. His wife Dorothy repeated that denial to Christianity Today, adding that removal of any Southwestern property was an accident and that the Pattersons want to meet with seminary officials to resolve the dispute.

Dorothy Patterson said she wants Southwestern to treat her and her husband “with some measure of respect.” She said Southwestern’s current president Adam Greenway tweets regularly about “love and how you treat people with respect,” but “I wonder, who is he talking about? What planet am I on that I cannot fit into this category?”

Since Greenway arrived in 2019, he has apologized for the ways Southwestern had “fallen short” under Patterson and attempted to chart a new course for the seminary.

The seminary’s allegations in the Book of Reports came in response to a motion made at the 2019 SBC annual meeting by messenger Ben Cole, a blogger and longtime Patterson critic. While SBC policy requires Southwestern to respond to each messenger motion referred to the seminary, Southern Baptists are discussing the level of detail in Southwestern’s response and what the squabble means for the denomination’s future.

Bart Barber, a member of the Southwestern trustee executive committee that fired Patterson, tweeted that “to my knowledge, every word of the @SWBTS report is true.”

Candi Finch, a Patterson advocate who was fired from Southwestern several months after his departure, replied that Southwestern’s report contains false allegations. The report said that Finch “emailed the Seminary’s confidential donor list to a private email address associated with an assistant to the Pattersons.”

SBC Recording Secretary John Yeats, who oversees publication of the Book of Reports, said he cannot recall another instance in SBC history “when the Book of Reports said something that would generate this kind of a response.” He added that SBC entities are “free to respond any way they want” to messenger motions, and “sometimes they view brevity as a prudent response.”

At nearly 1,400 words, Southwestern’s allegations regarding Patterson comprised the longest response by a seminary to a messenger motion in the Book of Reports.

“Most of the information provided has not been disclosed previously,” Adams said in a statement. “The information is provided because of its pertinence to the matters raised in the motion made at the 2019 Southern Baptist Convention annual meeting that was referred to the seminary and to which the institution is obligated to report back to the Southern Baptist Convention.

“Our Board of Trustees carefully deliberated over this matter and unanimously authorized the published response. As thorough as our response is, the information provided is merely representative of a pattern of actions of the Pattersons,” he said. “These facts may be uncomfortable to some, but the consequences of these facts have been far worse than uncomfortable—they have been quite harmful to the institution for which Paige Patterson was once its steward.”

Dorothy Patterson reviewed Southwestern’s report with CT, offering a point-by-point response. In moving off the seminary campus, she said, the Pattersons worked hard—with assistance from the Southwestern staff—to differentiate seminary property from their personal property.

The Pattersons have found two or three items the seminary claims are Southwestern property, she said. They have yet to return those items because they want to arrange an exchange for some personal items left on campus. Any donor files in the Pattersons’ possession are “very personal” in nature (including prayer requests, old notes on personal stationery, and notations of family deaths), not financial records, she said.

“I’m not going to just turn them over,” Dorothy Patterson said, adding the Pattersons have not attempted to divert funds from Southwestern and that Southwestern was given copies of all notes from donors that mentioned seminary gifts.

Paige Patterson is now the president of the Sandy Creek Foundation, through which he continues his preaching and teaching ministry. Scott Colter, his former chief of staff at Southwestern, was executive director until recently taking a position at Mid-America Baptist Theological Seminary, and Finch, the former Southwestern professor, is on staff.

Dorothy Patterson said that despite the command in Matthew 18:15 to meet with a fellow believer who “sins against you,” the Greenway administration has declined to meet with the Pattersons and despite the warning in 1 Corinthians 6 against suing fellow Christians, Southwestern has pursued legal action related to the Pattersons.

Paige Patterson told Baptist Press this week he was involved the formation of the Conservative Baptist Network (CBN), a group that has repeatedly raised concerns about the sufficiency of Scripture over worldly doctrines like critical race theory among Southern Baptist leaders and entities. Detractors say the accusations are inaccurate and fear the network is dividing the denomination.

Dorothy Patterson clarified that the Pattersons granted a CBN request to hold an early meeting at their Parker, Texas, home, but Paige Patterson told the group, “I’m not in charge.” The Pattersons have not been involved in any CBN decision making or given any money to the group, she said, though they have pledged to pray for the network.

Patterson’s support of the CBN is key for some network members who still revere him as a chief architect of the SBC’s Conservative Resurgence. Opponents see his affiliation as a strike against the CBN in light of his recent scandals.

Patterson supporters and detractors also are divided on what his latest go-around with Southwestern means for the SBC’s future.

Dorothy Patterson recalled late apologist Francis Schaeffer’s support of the Conservative Resurgence and his warnings that truth was being redefined in the postmodern world. Redefinition of her husband as an enemy of the SBC, she claims, could signal capitulation to postmodern notions of truth.

Patterson opponents, including sexual abuse survivors and advocates, say the SBC must cut ties with him to move forward into a new era of protecting the vulnerable.

Southwestern will give its oral report and respond to messenger questions when the SBC convenes in Nashville June 15–16.

Why the SBC Published a Report Alleging Paige ...