Home > Christian History > Archives > Issue 83: Mary in the Imagination of the Church

Issue 83 : Mary in the Imagination of the Church 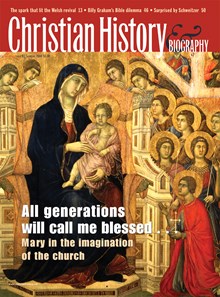 April 10, 428: Nestorius is consecrated bishop of Constantinople. Almost immediately, Nestorius began attacking the term "Theotokos" (God-bearer) to describe the Virgin Mary. "It is impossible that God should be born of a woman," he said, suggesting Christotokos (Christ-bearer) instead. He did not deny Jesus' nature as God but simply felt that the term challenged the reality of Christ's human nature. Though the church denounced Nestorius as a heretic, modern theologians ...

More from April 10
Most Popular
Give Today
Christianity Today strengthens the church by richly communicating the breadth of the true, good, and beautiful gospel.
Learn more
© 2020 Christianity Today - a 501(c)(3) nonprofit organization.