"At last meditating day and night, by the mercy of God, I began to understand that the righteousness of God is that through which the righteous live by a gift of God, namely by faith. Here I felt as if I were entirely born again and had entered paradise itself through the gates that had been flung open."

In the sixteenth century, the world was divided about Martin Luther. One Catholic thought Martin Luther was a "demon in the appearance of a man." Another who first questioned Luther's theology later declared, "He alone is right!"

In our day, nearly 500 years hence, the verdict is nearly unanimous to the good. Both Catholics and Protestants affirm he was not only right about a great deal, but he changed the course of Western history for the better.

Martin was born at Eisleben (about 120 miles southwest of modern Berlin) to Margaret and Hans Luder (as it was locally pronounced). He was raised in Mansfeld, where his father worked at the local copper mines.

Hans sent Martin to Latin school and then, when Martin was only 13 years old, to the University of Erfurt to study law. There Martin earned both his baccalaureate and master's degrees in the shortest time allowed by university statutes. He proved so adept at public debates that he earned the nickname "The Philosopher."

Then in 1505 his life took a dramatic turn. As the 21-year-old Luther fought his way through a severe thunderstorm on the road to Erfurt, a bolt of lightning struck the ground near him.

The scrupulous Luther fulfilled his vow: he gave away all his possessions and entered the monastic life.

Luther was extraordinarily successful as a monk. He plunged into prayer, fasting, and ascetic practices—going without sleep, enduring bone-chilling cold without a blanket, and flagellating himself. As he later commented, "If anyone could have earned heaven by the life of a monk, it was I."

Though he sought by these means to love God fully, he found no consolation. He was increasingly terrified of the wrath of God: "When it is touched by this passing inundation of the eternal, the soul feels and drinks nothing but eternal punishment."

During his early years, whenever Luther read what would become the famous "Reformation text"—Romans 1:17—his eyes were drawn not to the word faith, but to the word righteous. Who, after all, could "live by faith" but those who were already righteous? The text was clear on the matter: "the righteous shall live by faith."

Luther remarked, "I hated that word, 'the righteousness of God,' by which I had been taught according to the custom and use of all teachers ... [that] God is righteous and punishes the unrighteous sinner." The young Luther could not live by faith because he was not righteous—and he knew it.

Meanwhile, he was ordered to take his doctorate in the Bible and become a professor at Wittenberg University. During lectures on the Psalms (in 1513 and 1514) and a study of the Book of Romans, he began to see a way through his dilemma. "At last meditating day and night, by the mercy of God, I ... began to understand that the righteousness of God is that through which the righteous live by a gift of God, namely by faith… Here I felt as if I were entirely born again and had entered paradise itself through the gates that had been flung open."

On the heels of this new understanding came others. To Luther the church was no longer the institution defined by apostolic succession; instead it was the community of those who had been given faith. Salvation came not by the sacraments as such but by faith. The idea that human beings had a spark of goodness (enough to seek out God) was not a foundation of theology but was taught only by "fools." Humility was no longer a virtue that earned grace but a necessary response to the gift of grace. Faith no longer consisted of assenting to the church's teachings but of trusting the promises of God and the merits of Christ.

It wasn't long before the revolution in Luther's heart and mind played itself out in all of Europe.

It started on All Saints' Eve, 1517, when Luther publicly objected to the way preacher Johann Tetzel was selling indulgences. These were documents prepared by the church and bought by individuals either for themselves or on behalf of the dead that would release them from punishment due to their sins. As Tetzel preached, "Once the coin into the coffer clings, a soul from purgatory heavenward springs!"

Luther questioned the church's trafficking in indulgences and called for a public debate of 95 theses he had written. Instead, his 95 Theses spread across Germany as a call to reform, and the issue quickly became not indulgences but the authority of the church: Did the pope have the right to issue indulgences?

Events quickly accelerated. At a public debate in Leipzig in 1519, when Luther declared that "a simple layman armed with the Scriptures" was superior to both pope and councils without them, he was threatened with excommunication.

Luther replied to the threat with his three most important treatises: The Address to the Christian Nobility, The Babylonian Captivity of the Church, and On the Freedom of a Christian. In the first, he argued that all Christians were priests, and he urged rulers to take up the cause of church reform. In the second, he reduced the seven sacraments to two (baptism and the Lord's Supper). In the third, he told Christians they were free from the law (especially church laws) but bound in love to their neighbors.

In 1521 he was called to an assembly at Worms, Germany, to appear before Charles V, Holy Roman Emperor. Luther arrived prepared for another debate; he quickly discovered it was a trial at which he was asked to recant his views.

Luther replied, "Unless I can be instructed and convinced with evidence from the Holy Scriptures or with open, clear, and distinct grounds of reasoning ... then I cannot and will not recant, because it is neither safe nor wise to act against conscience." Then he added, "Here I stand. I can do no other. God help me! Amen."

By the time an imperial edict calling Luther "a convicted heretic"was issued, he had escaped to Wartburg Castle, where he hid for ten months.

Accomplishments of a sick man

In early spring of 1522, he was able to return to Wittenberg to lead, with the help of men like Philip Melanchthon, the fledgling reform movement.

Over the next years, Luther entered into more disputes, many of which divided friends and enemies. When unrest resulted in the Peasants' War of 1524–1525, he condemned the peasants and exhorted the princes to crush the revolt.

He married a runaway nun, Katharina von Bora, which scandalized many. (For Luther, the shock was waking up in the morning with "pigtails on the pillow next to me.")

In fact, the older he became, the more cantankerous he was. In his later years, he said some nasty things about, among others, Jews and popes and theological enemies, with words that are not fit to print.

Nonetheless, his lasting accomplishments also mounted: the translation of the Bible into German (which remains a literary and biblical hallmark); the writing of the hymn "A Mighty Fortress is Our God"; and publishing his Larger and Smaller Catechism, which have guided not just Lutherans but many others since.

His later years were spent often in both illness and furious activity (in 1531, though he was sick for six months and suffered from exhaustion, he preached 180 sermons, wrote 15 tracts, worked on his Old Testament translation, and took a number of trips). But in 1546, he finally wore out.

Luther's legacy is immense and cannot be adequately summarized. Every Protestant Reformer—like Calvin, Zwingli, Knox, and Cranmer—and every Protestant stream—Lutheran, Reformed, Anglican, and Anabaptist—were inspired by Luther in one way or another. On a larger canvas, his reform unleashed forces that ended the Middle Ages and ushered in the modern era.

It has been said that in most libraries, books by and about Martin Luther occupy more shelves than those concerned with any other figure except Jesus of Nazareth. Though difficult to verify, one can understand why it is likely to be true. 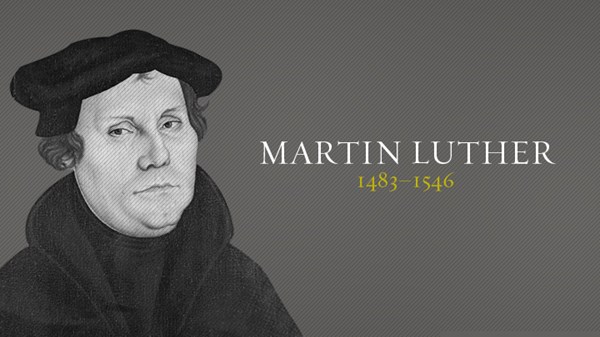