There is a 35-day span where Easter can occur. Why? It’s a long story, but let’s get into it.
Farrell Brown

This week, as they so often do, my Sunday School class of bright 12- and 13-year-olds posed a tough question: why did Easter fall on Evan's birthday last year, but it's falling on Abby's birthday this year? Though I couldn't answer on the spot, I knew I had a secret weapon back at the office—saved for just such an occasion: a short article by Farrell Brown, a retired chemistry professor with an interest in the historical interactions between science and religion. Here, as a public service for those still scratching their heads over the calendrical wandering of Easter, is Dr. Brown's answer to my Sunday School kids' question—and thrown in for free, the story of why Easter dates still differ in different parts of the world:

The date of Easter Sunday, a so-called movable feast day in the Christian Church year, may seem mysterious to many who celebrate it. There are 35 possible dates in the spring season (northern hemisphere) for celebrating a one-time event. Why this wandering? The answer comes from decisions made several centuries after Christianity's inception.

And why do most Eastern Orthodox Christian Churches observe Easter occasionally on the same Sunday as the rest of Christendom and at other times as much as five weeks later? This answer lies primarily in how different people reacted to a centuries-old papal decree.

Our first stop on this tour of the wandering Easter is a quick study of how calendars were used in the Biblical lands around 30 A.D. Although the Julian or solar-based calendar of the Roman Empire had been in place since 45 B.C., it did not supplant the lunar calendar that was the chart and compass of 2,000 years of Jewish history. (A lunar year is 12 lunar cycles of 29.53 days each or 354.36 days while a Julian year is 365.25 days with a leap day every four years.) The Julian calendar functions by having three years of 365 days and one year of 366 days every four years.

The incongruence of the two calendars had marred historical recordings in the Eastern Mediterranean and environs since the dual systems began. And to add to the confusion, Jesus' followers had failed to record the exact date of their Lord's resurrection. Many of those first believers expected Jesus to return soon, a hope that (some scholars believe) rendered such anniversaries unimportant for them. For these reasons, a single, universally accepted date for the event's celebration had little to no chance.

Three hundred years later in the reign of the Roman Emperor Constantine, Christianity was beginning to spread though out the Empire. Since any self-respecting religion was expected to have its religious festivals and days of observance, a date for celebrating Easter now became a priority. In fact, this was one of eight major topics considered by priests and bishops at the church's first Ecumenical Council in 325, in Nicea (present-day Turkey). One unanimously accepted canon guaranteed that Easter would never fall on the beginning the Jewish Passover, perhaps reflecting Christian animosity towards the Jewish people for their perceived role in Jesus' death.

However, each church group present at Nicea seemed to have a different opinion on the matter of Easter's date. The biggest division was that between the Eastern churches of Antioch and Syria, which still relied on the Jewish or lunar calendar for determining the date of Easter, and the Western churches of Alexandria and Rome, which employed the efficient solar calendar. The resulting accord, as commonly stated, was that Easter shall fall on the first Sunday following the first full moon following the spring equinox. (The spring equinox is one of the two times in the year when the sun crosses the celestial equator and the length of day and night are approximately equal.)

This explains the 35-day span where Easter can occur (March 22 - April 25, inclusive): the first Sunday after the first full moon after the spring equinox may occur as little as two or as many as 37 days from the equinox.

We owe this complicated formula, with its attention to both the sun (the equinox) and the moon (full phase), to a political compromise among Nicea's gathered factions. The Eastern Christians injected the irregular phases of the moon into the calculations—thus causing the "wandering" effect—because they wanted their lunar calendar to keep its historical (though problematic) role in determining important dates.

Cumbersome though it was, the Nicean accord ruled the church's commemoration of Jesus' resurrection for next 900 to1000 years. But this was not the end of the story. Unfortunately, the Julian solar calendar contained a non-trivial flaw that reared its head as the centuries crept along. This flaw affected the celebration of Easter, and its correction wrought great strife and consternation among Christians.

In the mid-1200's, an English Friar named Roger Bacon observed that the date of Easter, in addition to its prescribed wandering, was drifting farther and farther into the spring season. Astronomers now knew that the length of the solar year was closer to 365.242 days than to the 365.250 days assumed in the Julian calendar year. In 1,000 years, the Julian calendar counted 365,250 days, while in actuality, 365,242 solar days had elapsed. Bacon realized that each Julian year "overflowed" slightly into the next solar year, and that any given date was farther along in real time than the calendar would imply. The man-made calendar might say one thing, but nature's seasons were not fooled! Though the small mismatch caused a shift of only 11 minutes per year, this had accumulated—from Julius Ceasar's to Roger Bacon's day—into a troubling 9 days. Bacon's petitions to correct the drift went unheeded.

By the mid-1500s, Pope Gregory XIII recognized the consequences of the drift and entrusted a solution to a Jesuit mathematician and astronomer, Christopher Clavius. The enlightened Pope endorsed Clavius's findings in 1563 at the Council of Trent, and 19 years later, on October 4, 1582, Gregory signed a papal bull promulgating the new calendar that bears his name—the Gregorian calendar.

Gregory's calendar inserted a correction to the Julian calendar from that time forward. Ingeniously, it removed eight of the 250 leap days (February 29) occurring in each 1,000 years of the Julian calendar, thereby approximating more accurately the average number of days in a year—namely, 365.242. The exact rule is that at the century boundaries, a leap day shall be observed only when the century number is wholly divisible by 400. In other words, observance of a leap day in 2000 was a special event. It will not happen again at a century boundary until 2400.

While the Gregorian calendar solved the problem for future years, there remained the critical matter of correcting the older calendar's "slippage." By 1582, the cumulative mismatch of the Julian calendar year against the solar year totaled 10 days. The papal bull addressed this problem in a practical but provocative way: it advanced the Julian calendar by 10 days. The calendar days October 5 - 14, 1582 simply vanished!

This part of Gregory's decree sealed confusion and conflict across Christendom. Not only would Easter continue its wandering, but it would wander differently in different regions. Germany, with its mixture of Catholic and Protestant enclaves, was particularly hard hit. For 193 years, Easter was celebrated variously at different times by different Germanic states. The Anglican Church joined the fray, resisting the change for nearly 170 years.

Some jurisdictions within the Eastern Orthodox Church retain to this day the Julian calendar for determining festival dates. That calendar is now 13 days behind the Gregorian calendar and the difference in the year 2,100 will be 14 days. For immovable festival dates, the lag determines exactly the Orthodox date; e.g., Christmas occurs on January 7 (until 2100). For movable festival dates, the situation is more complicated. Both the moon phases and the equinox are at play and the ecclesiastically defined equinox at Nicea, March 21, becomes April 3 in the Gregorian calendar. An in-depth explanation is beyond the scope of this historical recount. But it is interesting to note an agreement throughout Christendom of Easter dates in 2001 and 2004.

For more on Easter and the calendars, see the following sources:

Lewis Patsavos. "The Calendar of the Orthodox Church". Retrieved from www.goarch.org/en/ourfaith/article7070.asp

Farrell Brown is Professor Emeritus at Clemson University and resides in the Clemson area. He may be contacted at farrelb46@bellsouth.net . 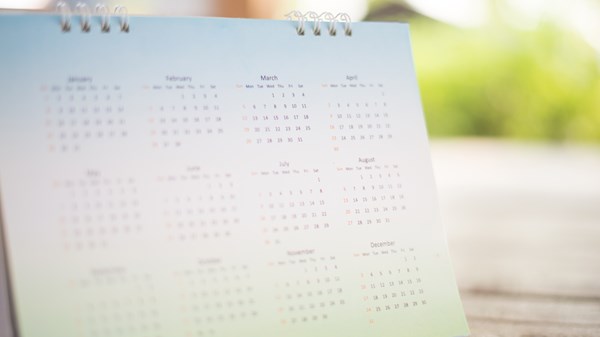