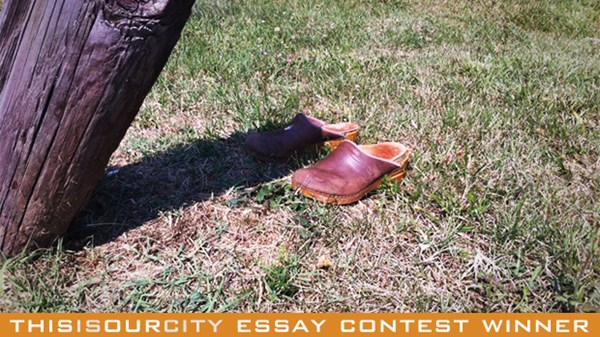 Three years ago, my family moved into a predominantly African American neighborhood of Washington, D.C., to plant a church. Since then, we've had a lot stolen from us: a GPS, sunglasses, both my daughters' bicycles, a television, my wife's jewelry box, sinks, ceiling fans, and a garbage disposal. But the most recent theft blew my mind: Someone had snatched a pair of old clogs from our front porch. At first we just assumed that my wife had misplaced them, but on a neighborhood park with my eldest daughter, there they were, sitting in the middle of a field: the clogs. I regarded them sadly. Not knowing where they had been, we left them there.

We began to make our way back home, when my daughter asked me a question:

"Daddy, why do people always steal things from us?"

I struggled to formulate the correct response. A couple of years ago I would have told her that people steal because they are poor and need money. That still make some sense to me; high unemployment and poverty are common in our neighborhood, and we are hardly the only victims of petty crime. But that doesn't explain why someone would steal my girls' bicycles, not to mention my wife's clogs, which were worth less than nothing. Those thefts smacked of something more malicious than simple financial need.

Perhaps I should tell her that people steal from us because we are the minority here, thus giving voice to the fear of minorities everywhere. Asians make up less than 1 percent of the population in our zip code, in a neighborhood that's 86 percent black. We live on a busy street corner, and drivers are always transfixed by the sight of a large Korean family in an overwhelmingly black neighborhood, so much so that they often don't realize that the light already turned green.

But we are not just any minority: We are Asian, and Korean. And that makes us an even larger target for crime. There is a long history of antagonism between African American and Asian communities, specifically Koreans, that has gone generally unnoticed in the United States, because the discussion on race is often framed as division between blacks and whites. The usual explanation for this antagonism runs thusly: blacks resent Asians who set up shoddy stores in their neighborhoods, charge exorbitant prices, and then take that money back into the suburbs, a view that is not without merit. Warranted or not, that perception has made Asians fear that they were a larger target of violent crime in urban areas.

What would be wrong pastor Chin, in telling your daughter that there is a selfishness within men that drives them not only to steal but to do things that hurt others, and that selfishness in called sin? Racism is also an only a by-product of that same condition. When you told her you did not know were you telling her the truth pastor Chin?

Hmm. I know there were issues between Koreans and Blacks in NYC in the 1980s and in LA around the Rodney King unrest, but I really haven't heard of anything since that time. In NY one incident involved a Korean store owner slapping a kid allegedly misbehaving and the community boycotting the store. That's about it. I do see Korean stores all over Black neighborhoods and doing well. If the relationships were really bad, Koreans would set up shop in other neighborhoods with nicer neighbors. As for the thefts, if you talk w/your nonKorean neighbors, I'm sure you'd learn you weren't the only ones being robbed. Robbers want stuff, period. They really aren't nationalistic about who they steal from. In the 1990s, I can't tell you how many times thieves broke the glass out of my black-owned car & took my stuff. I even had a Black friend who just didn't lock his car doors. He said the alarm would still go off when thieves opened the door and he wouldn't have to pay for expensive new glass.

You speak from the Father's heart. Thank you for choosing not to pass on a legacy of 'prejudice' to your daughter. Racism has always been an issue of the heart, a heart of darkness, not an issue of colour. I know all too clearly what it is like to be paintbrushed with stereotyped assumptions about my character based on my ethnicity or gender as an Indo-Trini-Canadian woman. Instead you chose to turn the focus from the temporal to what is eternal. Your loving perseverance will be what breaks through the prejudice. May you always see people through God's eyes which sees straight through to the heart and its need.

And yet, we assume the petty theft of things like clogs couldn't happen in other neighborhoods? I've seen a lot of petty vandalism and theft in affluent and middle-class suburbs, both of which I've lived in. But it's a delusion that many people live with, thus the outcry when crimes like mass shootings, kidnappings, armed robberies, etc. happen in certain areas, we hear, "That stuff doesn't happen HERE." Well, it just did. Now what? I think it speaks more to the human condition. That is not to dismiss the very real components of race, class and culture, but to acknowledge that a lot of issues have a lot to do with the human heart. How it gets manifested may change from one context to another, but we are all fallen creatures.

My daughter lives in the same neighborhood (Deanwood) as Pastor Chin. She has experienced some of the same problems that he has. She likes the neighborhood because it IS a neighborhood. People know who lives there and look out for their neighbors. We have visited her there--and were a minority. I hope things go well for him.