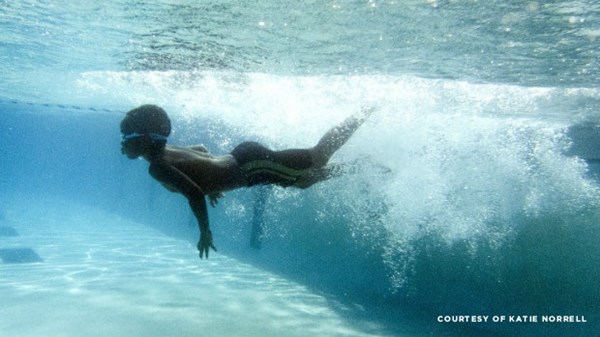 Painfully thin for his age, Martin shivered uncontrollably by the side of the city swimming pool. He held his sides in a futile effort to keep warm. I was puzzled. A rare June heat wave had swept through Knoxville, and the temperature was pushing 90.

A few weeks later, Martin squeezed in beside me on the bus ride to our first swim meet. He was a wiry, bouncy 10-year-old with mischievous blue eyes and a killer smile. He could rarely sit still long enough to hear the workout set. Yet today he slumped down against the window and curled into a ball.

"Coach Doug," Martin asked after a few minutes, "can I have my dinner now? I haven't eaten in two days." A father of four, I know a con when I see one. "No, buddy," I teased. "You need to wait until after the meet like everyone else."

The summer got even hotter, and Martin kept shivering. One evening, a social worker who knew Martin dropped by the pool. I asked her if she knew why Martin always shivered. She pulled me aside and whispered, "It's because he's literally starving. The woman he lives with told a judge that she was 'starving the Devil out of him.' " I felt sick.

Summer swimming is enormously popular in Knoxville. Until a few years ago, however, kids like Martin could not compete in our summer swimming leagues. Every year on the last weekend of July, 2,300 wet kids jam into The University of Tennessee aquatic center for three days of fast times, cheers, and soggy ribbons. Until recently, however, no children from our urban neighborhoods were able to join in the fun. Lacking access to pools, few knew how to swim. As a result, drowning is a major cause of death among children in the inner city.

Five years ago, Emerald Youth Foundation, a Christian urban youth ministry, saw the need and launched Knoxville's first inner-city swim team. Today the team has about 50 kids. I'm the head coach. Our swim team is one beautiful example of how the church in Knoxville is seeking the common good of our city. The team is run by dozens of volunteers. Emily and Spencer, for example, compelled by God's command in Jeremiah 29:7 to "seek the peace of the city," moved into Martin's neighborhood.

I wondered why it cost so much to go see poor people. As a youth director, I had our students participate in tutoring in our local city before going on a mission trip. The mission trip itself cost $200 a person for 10 days - but it was a 1000 mile van ride to Mexico. After 4 years in Haiti I couldn't justify spending thousands on missio-tourism. My first "mission trip" was 5 years long. The needs are all around us though much more severe in other countries. I taught in an urban school and saw teachers abused by students they were trying to help. Some of the poverty here is self inflicted, some is a remnant of slavery. Although, most poor in the USA are much better off than they would have been had they never come here. The freedom of the gospel is foundational for most trying to escape poverty, there needs to be a change in thinking and behavior that Christ can give.

Our North Carolina suburban church had a pulpit exchange with a British church this summer. The pastor and his South African wife came. To me, the most startling comment he made was that our community reminded them both of South Africa. I didn't get a chance to press for details, but I inferred that the resemblance extended beyond our red soil. We have large suburban lots with big houses, good city services, luxury shopping malls and white residents in part of the city ... various people of color living overcrowded in small, worn houses with iron-grated neighborhood marts and poor services in other neighborhoods. If you know how to see it, you can even recognize homes where people are living behind boarded-up windows. The return from a Third World short-term can make it hard to imagine that other Americans, living in so wealthy a nation, could possibly need your church's help. And yet, if you choose to see, it's in front of you.