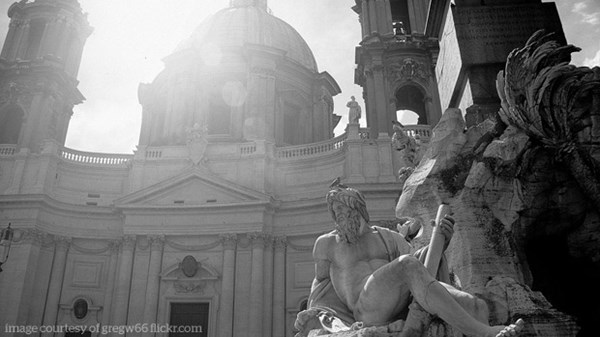 We Can't Go Back to the Garden: Critiquing Evangelicals' Over-Ruralized Eschatology

The Bible suggests we should envision the new heavens and earth as an urban landscape, not a field of lilies.
Eric O. Jacobsen

This article originally appeared in Comment magazine, the opinion journal of Cardus.

The Project for Public Places has a list of some of the best public squares in the world. On this list are well-known places such as Piazza Navona in Rome, Piccadilly Circus in London, the Hotel de Ville in Paris, and a number of less familiar places, such as Rynek Glowny in Krakow, Poland, and the Plaza Hidalgo in Mexico City.

I have visited some of these squares; they are, indeed, delightful places to enjoy a strong cup of coffee in the warm sun and watch the vibrant parade of humanity against a backdrop of stunning architecture. This list evokes some of my most cherished memories of feeling fully alive and engaged with the delights of this world.

But I also become a bit restless as I wonder about the places I haven't yet experienced. And I become nostalgic for the time in my life when I was free to travel to exotic destinations and could while away an afternoon doing nothing.

This may seem like an odd direction to divert this bittersweet stream of thought, but I wonder if I'll have a renewed opportunity to enjoy these places during the time of Christ's eternal reign. That is to ask: Will public squares be included in the new heaven and earth?

This question can be subsumed under the broader question of the relationship between creation, culture, and new creation. Over the past couple of years, I have witnessed an encouraging development in evangelical eschatology (see Randy Alcorn's Heaven and Eugene Wittmer's Heaven Is a Place on Earth).

Evangelicals, it seems, are becoming more comfortable with the idea that followers of Jesus are not going to spend eternity floating around in some kind of remote ethereal location, but will experience redeemed existence in the very physical setting of a new heaven and a new earth.

A key to this significant paradigm shift has been a reconsideration of the provocative text in the second half of 2 Peter 3:10. As the King James Version has it, "The earth also and the works that are therein shall be burned up." One common way to understand this text is that the earth and sky (heaven) will be completely annihilated, then later replaced with a brand new heaven and earth.

However, another possibility—and the one that some of the more contemporary translations use—is that the earth and everything on it will be disclosed or laid bare. That is to say, the fire will not annihilate the entire earth, but will refine it by burning away everything that is unworthy (Malachi 3:2-3). This newer translation seems to fit the context better, as the author had just made a parallel reference to the destruction of the Flood, which wreaked havoc on creation but didn't annihilate everything.

This eschatological paradigm shift helps to combat some of the Gnostic tendencies inherent in evangelical theology. Evangelicals have been tempted to believe that to be spiritual is to deny or ignore the parts of our lives that have to do with our physical existence. But when we think of eternity in the context of a real physical place, we tend to take the physicality of our lives more seriously in the here and now.

This is a good development, and I applaud it heartily. However, it also leads us to another tendency in evangelical theology. Evangelicals have also been tempted to think of their eternal reward as a return to the simplicity of Eden, more than a journey to the New Jerusalem. We have longed for pristine naturalistic settings of fields and forests and the simplicity of the organic nuclear family as the context of our eternal existence.

We have pictured heaven in these terms, rather than making room in our imagination for good (read: God-honoring) cultural developments and the beautiful complexities (read: shalom) of life in the society of others as the context of our future existence.

William Cowper, a well-regarded hymn writer of the Clapham Sect, represents the former perspective well in his poem "The Task":

Domestic happiness, thou only bliss
Of Paradise that hast survived the fall!

God made the country and man made the town.
What wonder then that health and virtue, gifts
That can alone make sweet the bitter draught
That life holds out to all, should most abound
And least be threaten'd in the fields and groves
Possess ye, therefore … your element.

This poem seems to confuse the biblical hope in the redemption of all of creation with the slightly different notion that perhaps certain parts of creation have not been affected by the Fall (domestic life and nature) and so do not need to be redeemed. Cowper expresses a longing for a return to a pre-fall state, rather than a full-bodied experience of redemption.

I call this tendency an "over-ruralized eschatology," because it ignores the urban images of the eschaton that we find in the Bible (Revelation 21:10 and Zechariah 8:4, for instance) in favor of the rural and domestic images that many find more comforting. While I don't want to deny the possibility of rural beauty and even domestic bliss in the eschaton, the problem I have with ignoring the urban in our eschatology is simply that it isn't very biblical. No matter our aesthetic tastes, the story of our salvation goes from a garden to a city, not from a garden to a backyard.

The other problem I have with this perspective is that leaves out the possibility of me enjoying places like Rynek Glowny unless I can somehow figure out a way to free up my schedule enough for a quick trip to Poland. Weighing my inability to even get a quick weekend away with my wife against the very real possibility that Peter really meant "disclosed" rather than "burned up," I'm staking my hope on enjoying many of these wonderful squares in the eschaton.

Eric O. Jacobsen is the author of Sidewalks in the Kingdom: New Urbanism and the Christian Faith and the forthcoming The Space Between: A Christian Engagement with the Built Environment (Baker, August 2012). A member of the Congress for New Urbanism, he is senior pastor of the First Presbyterian Church in Tacoma, Washington.

We Can't Go Back to the Garden: Critiquing Evangelicals' Over-Ruralized Eschatology