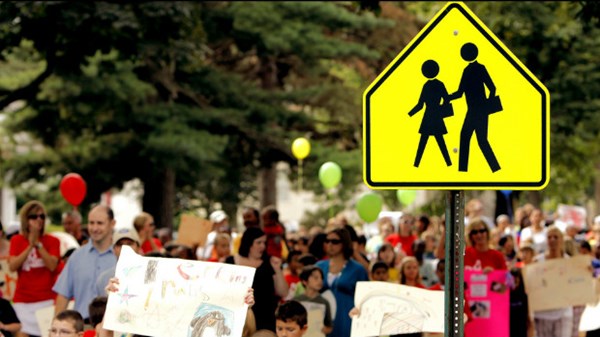 Why We Send Our Kids to the Poorest Public School

It's not just my own kids' well-being that matters anymore.
Jennifer Slate

For the past 14 years, my full-time vocation has been "mom." I have spent a lot of time making decisions about what's best for my three children: which preschools they should go to, which sports teams they should join, which instruments they should play. Eight years ago, I was well on my way to figuring out the life I wanted for them.

Then God stepped in.

In 2005, at the height of the housing boom, my husband's job took us to Charlottesville, Virginia. We left our suburban (lawnboy- and maid-included), 4,000-square-foot parsonage in search of a house just as lovely in the city deemed the "best place to live in America." As we looked at houses, we didn't think much about the school systems for which they were zoned. We called the private Christian school tied to our new church, assuming we would educate our kids just like we did in our old city. But $10,000 a kid wasn't going to work on a campus minister's budget.

One of the first people I met in Charlottesville was an older teacher at the school. I told her I was worried about sending our oldest into first grade. She asked, "What would make you stop him from going here?" I thought about it for a minute. "I guess if he got beat up by another student." Her follow-up question to this young and fearful mother: "How many times?"

That first year I wept and worried. There were kids starting kindergarten who didn't know that an alphabet existed; kids without books at home; kids without parents at home, babysitting each other while their parents worked two and three jobs. I spent a lot of time that year asking God, "Why me?" as in: "Why did I have to be exposed to so much poverty?"

Thank you so much for this article. Our kids are enrolled in public school too -- but many people assume that I homeschool them, because my husband is a pastor. We have had so many opportunities at our school to be salt and light to people who have been deeply wounded by Christians or religious people. And I love that your kids are learning that "ministry" doesn't happen at certain times in a church building, but by reaching out every day to those around us.

I love this story! Fabulous testimony of living out your faith and the faith of your family- You are showing-living out- that we can impact the local schools. I love the details you share of how you trust the Lord for your children's lives, in such a tangible way. So many people say the words, but you live it out! This quote is awesome: "As I began to make decisions about my children's lives in a different way. What if I didn't only think about the fabulous life I could make for my three? What if I stood up for not only what was good for mine, but was good for all? What size car would be big enough to carpool other kids? What sports league should we play in so that everyone could participate?"- it is such a great way to teach your children compassion. Though we do not send our kids to an inner-city school as we live in the burbs, we speak about this so often, and reach out to a Sudan refugee community in N. Portland. It is huge in our lives EXCELLENT story- Cornelia Becker Seigneur

Jennifer, we lived and raised our two girls in the inner city & public schools. We also tutoring, served on the community advisory council, and so on. Many were helped; the schools improved. Our girls got hurt (but mostly from other kids in church); they missed out - their education wasn't on par of many Christian kids. Neither finished college - yet. Now they are young adults, married, with kids. One married the most godly young man, an immigrant, who pastors a multicultural church that is seeing lots of people come to the Lord. Our daughter leads the youth group of second generation immigrants - the kids are sticking with God. Our other daughter has radar to seek out hurting people no matter their ethnicity and provide much support. Yea, they missed out on being "successful," if success is lots of money and moving in important circles. But in terms of the Kingdom, their "education" means they move in any circles and understand what "real" life & ministry is all about.

We shouldn't look at this article as a one-size-fits-all template for all families, but amen, amen, amen! Parents are never going to create a Christian utopia for their children, so let's stop trying, and let's stop pretending this "ideal" cozy bubble lifestyle is what God wants for them anyway. This selfish 'put-yourself-first' mindset is inappropriate for us, so we shouldn't insist on teaching our children that it should be important in their lives, where we make everything a 'put-them-first-over-everyone-else' mindset. How will they not be influenced by society's materialistic and individualistic tendencies if this is the example they see in us? Yes, we are certainly called to take care of them, protect them, etc. first, but it should not come at the expense of others. We and our children are called to love our neighbors, not avoid them. In the end, this line is worth repeating once more: "What if I stood up for not only what was good for mine, but was good for all?"

Jennifer, you have articulated well the fact that we are to actively seek God's kingdom daily in our lives and teach our children to do the same. Too often what we think our kids need is not what they actually need for maturity in Christ, and you are giving your children a wonderful gift of learning to love others that are not like them; Just as Jesus did. You are not "sacrificing your children" per another's comment; You are raising them as God has led you to do and He will bless you and them with spritiual maturity. Thank you for your wonderful article!

Why We Send Our Kids to the Poorest Public School