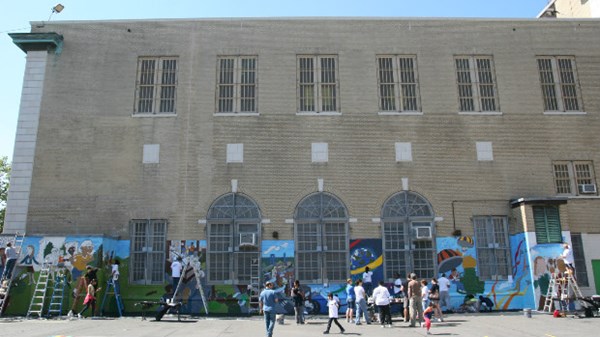 "God, thank you that I'm not like my bigoted Christian friends."

So prayed an unrepentant Pharisee in the months after September 11. Let's call him Jay.

Jay lived then, and still does, in Bay Ridge, Brooklyn, one of the fastest-growing Arab Muslim neighborhoods in the country. In the weeks and months following 9/11, non-Muslim Americans in Bay Ridge and beyond allowed suspicion and prejudice to get the best of us. What previously remained unspoken was now tolerated, indeed affirmed, in an era of heightened national security.

Christians, it seemed to Jay, became accepting of racial profiling, name-calling, and outright disdain for Arab immigrants. Jesus followers who on September 10 would have said all the right things about loving others (as themselves) and judging not (lest they be judged) now derisively referred to "towel heads" and raged of nuking entire countries.

To this, Jay responded: "Thank you, God, that I'm not a bigot like those Christians. Help me build friendships with my new Arab neighbors, beyond occasionally buying falafel."

Then he proceeded to do nothing to actually befriend his Arab neighbors (although he still enjoyed falafel).

In 2004, the Billy Graham Evangelistic Association asked Jay to co-chair the youth committee for what would be the evangelist's final crusade in June 2005. He was tasked with persuading inner-city teens to spend a summer afternoon listening to a then-86-year-old farm boy from North Carolina preach. The committee figured Christian kids would attend such a historic event with their parents or their youth groups. But Graham's evangelistic gift would be wasted solely on Christians. The real aim, they argued, should be to get unchurched youth to the event.

The committee grew to include 787 youth workers and an active core of more than 40 leaders. They created a marketing strategy aimed at nonbelieving teens that local youth groups could use in their public schools.

It was the first time a group of NYC evangelicals had used the language of "school adoption" or strategized together about engaging public schools. The committee's only motive for school engagement was poaching fish, not to serve or partner with "adopted" schools. The big prize for the crusade, and for Jay, was baiting the "fish" in schools to attend the great fisher of men's big event.

As they dutifully conducted market research, Jay and his team encountered a reality that shook them to the core: the injustice of a system where four out of five NYC students finish their public education unprepared for college or careers. Eighty percent of the city's 1.1 million students is a population larger than all but 30 or so American cities.

Even among the students who did what they were told—graduate high school—only three in four were prepared for life after school. Among black and Latino students, only 13 percent of black and Latino students finished ready, and this staggering underperformance had been true for generations. The promise of public education as a pathway out of poverty was a myth, it seemed, and Jay and his colleagues had helped to perpetrate the fraud.

No wonder teens in youth groups refused to do the Bible studies youth pastors encouraged. Reading three or four grade levels behind academically makes exegeting the heady theology of Romans, for example, especially intimidating and unlikely.

Surely the gospel Jesus preached—the one that proclaimed good news for the poor, jubilee justice for the oppressed, and the kingdom on earth as it is in heaven—would encompass and address such injustices. But somehow it wasn't on Jay's crusade agenda, just as it hadn't been on his youth ministry agenda for more than 15 years. Conviction set in.

A second paradigm shift awaited Jay at a breakfast the youth committee hosted for the crusade. One of the presenters asked how many of the 787 youth workers got paid to do youth ministry. The couple dozen, mostly parachurch hands that went up vividly captured both the state of youth ministry in the city and the picture Jesus painted of a plentiful harvest and too few laborers. Relying on several dozen vocational ministers to reach 2 million youth in metropolitan New York suddenly seemed an exercise in futility.

Jay began calling for churches to redefine "youth minister" to include any believer who maintains any meaningful contact with youth. That includes parents, mentors, teachers, custodians, health care workers, entrepreneurs who hire teens or market products at them, and, especially, students. And "youth ministry" should no longer be about ministering to youth, but about empowering youth to minister.

Out of the Saltshaker

The two ideas converged after the crusade, as many youth committee members met to wrestle with what they had experienced. Their attention on schools, and their prayers for laborers, awakened them to the insight that on any given Sunday, upwards of 80 percent or more of the people in pews in churches across New York City had direct or indirect connections to schools. The fact that schools were so broken betrayed a church that wasn't equipping saints to serve in the schools. Moreover, the fact that 1,700 NYC schools were mostly underperforming even though 7,100 self-styled evangelical, Pentecostal, or charismatic churches mostly preach a God who answers prayer betrayed a church that wasn't praying for schools.

Jay and several colleagues began challenging New York City churches to reclaim the saltiness Jesus invoked in the Sermon on the Mount. What might happen if churches began to partner with schools for advocacy, prayer, and meaningful service? Dare they expect God to use them as answers to prayer, and for schools to improve and students to be better served?

By 2007, a number of senior New York ministers began investing in innovative church and school partnerships. In 2008, Jay and his colleagues launched 20/20 Vision for Schools to mobilize churches and other community stakeholders to partner with schools for sustainable reform.

After talking about these issues for several years, Jay once again confronted his inner Pharisee. He didn't lead a community group or congregation, so he couldn't commit an organization to partner with a school. Nor was he involved in direct youth work anymore, so he couldn't directly empower students to lead change. And his son attended a private Christian school, so volunteering at a public school was difficult.

In 2009, Jay and his wife enrolled their fourth-grade son in the local public school. Their prayer as they walked to the building the first day: "Help us become answers to someone else's prayer today. Give us eyes to see and ears to hear what you see and hear, and the courage to respond." On arrival, they were bombarded by signs in a dozen languages posted at the school entrance. The hijabs and burqas confirmed the demographic changes afoot in Bay Ridge.

A couple weeks later, Jay and his wife met their son's teacher at an open house. The teacher told Jay that of 25 students in the class, 12 were learning English as a second language. Her biggest challenge was teaching them all how to revise and edit written work. Jay heard an open door, and asked if it would help to come in weekly to tutor students who required individual attention. Within weeks, Jay noticed a pattern: most of the students she assigned were Arab immigrants. The most consistent, a boy from Yemen named Mohammed.

Over the next two years, Jay mentored Mohammed once a week for an hour, helping to teach him how to read and write. In return, Mohammed became Jay's first Muslim friend from the neighborhood, and taught Jay how not to be a Pharisee. 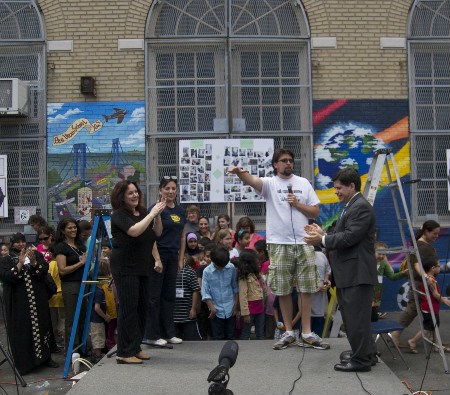 Jay and other community leaders mark the completion of the school Welcome mural in 2011.

In 2010, Jay proposed a "Welcome" themed mural for the schoolyard to celebrate the school's extraordinary diversity and create a hospitable environment for immigrant students and families. In the spring of 2011, more than 400 volunteers from eight organizations, including five churches and the school, executed the 875-square-foot project over six weeks. In the final days before the ribbon-cutting celebration, Jay overheard a conversation between the lead pastor collaborating on the project and his Palestinian friend as he painted clouds atop an extension ladder. The pastor had become a fixture at the school as his church's community art center had taken lead on the mural. Both he and she were avid bicyclists and they began comparing favorite places to ride. She mentioned a park he'd never visited, so she proposed getting the children together to go on a family play date bike ride. 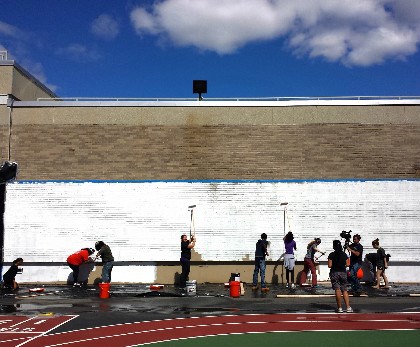 Later, Jay realized the entire project, every volunteer, every square inch of paint, every dollar spent on supplies, was an answer to that Palestinian mother's prayer. She had been advocating a schoolyard mural long before he ever proposed one.

This past weekend, at a Brooklyn school that suffered $1 million in damages during Hurricane Sandy, volunteers from Coney Island Gospel Assembly, the school, and other organizations began installing Coney Island's Resilience Mural at PS 329. Their model: the community-building template forged during the "Welcome" mural.

Something happens when people of faith do like Jesus taught us and get out of the pews to serve our communities in salty ways. When we prioritize justice, embrace our immigrant neighbors, and fight to restore broken public graces, like public schools, the gospel we preach reclaims its soul. And we rediscover ours.

Jeremy Del Rio, Esq. is a recovering Pharisee attempting to love public schools, his neighborhood, and his beloved New York City well. He directs 20/20 Vision for Schools and lives with his wife and two sons in Bay Ridge.

This article reveals the need for Christian mothers to gather together to pray for their children and schools, what we do in Moms in Prayer International, www.MomsInPrayer.org. Currently, only 5.09% of New York State's schools are covered by a group. That means almost 95% of 6,616 are not. Jesus left us to do the work and a huge portion of the work is done in prayer before the face of the enemy, the prince of this world, by going over his head to the Ruler of the Universe. Followers of Jesus are the only ones who can do the work of prayer, and it is hard work.

1 of 2
Jay and other community leaders mark the completion of the school Welcome mural in 2011.