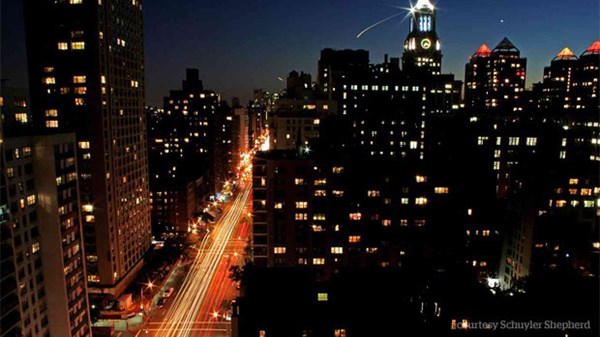 Why the evangelical quarterback has much to look forward to.
Anna Broadway

Second: Although many commentators are either concerned for your faith or rooting for you to screw up, I think you'll do just fine in your new home. In fact, you may thrive there in a way you couldn't in Denver. Like you, I was in my mid-20s when I moved to New York. Like you, I had been homeschooled. Unlike you, I did not have a job at first and most of my family was three or more time zones away from me. But despite the real challenges the city can present to a believer, my time in New York proved one of the spiritually richest seasons of my life. I hope your time there proves to be the same.

Yes, as Kathy Keller noted recently on the City site, you may encounter sin on more open display than you've seen in other cities. I can think of multiple times I encountered certain sexual acts on the subway or the street. Greed and other vices (I witnessed public nudity, fights on the subway, and alcohol and drug use) can be thrust in your face in ways less visible in the suburbs.

Yet precisely because NYC's spiritual "soil" is challenging, worshipers of Jesus tend to become more deeply rooted. Being a Christian carries little social capital in New York, unlike places where the line between civil religion and biblical faith is blurry. Thus, the people in its churches are usually relatively serious about their faith.

Whatever church you end up in, it may well offer "home fellowship" groups—weekly gatherings of a dozen or so, often in someone's apartment. Though I imagine your schedule could make it hard to join such a group, I would urge you to make the effort. The two groups I was a part of during my four years in New York significantly altered my understanding of the day-to-day Christian walk.

I'd grown up in the church, so I knew you couldn't go faith alone, yet I still thought most of the "feeding" of one's soul happened through the teaching on Sunday morning, one's heart being reached primarily through the mind. Home fellowship groups showed me otherwise. It’s possible I could have learned this lesson anywhere, but there’s a reason people joke that you can make it anywhere if you survive New York. It can be an incredibly challenging place to live. Yet God used those challenges to work on sin and broken thinking in my life – particularly a tendency to privilege blood kin over the spiritual family he gives us through his church.

When I went through an extended season of having to eat and travel on $50 a week, my home fellowship tangibly and creatively met my needs. One week the host emptied out her change bowl, providing enough money for me to do a few hours of my freelance work at a coffee shop, around other people, instead of inside my tiny, lonely apartment. Another week, a friend made me stop at a corner deli after the meeting so she could buy me a couple bags of produce. The twin bed I used the entire time I lived in New York was a long-term loan from another couple from church.

Before then, I'd known intellectually that the church is our spiritual family, but I hadn't believed God could use fellow congregants to meet such mundane, practical needs. And they didn't just meet materials needs. Most nights, my home fellowship group concluded our time by splitting off into smaller groups (usually by gender) to share needs and briefly pray. Over weeks and months, as we prayed through various job and relationship changes, engagements, and family trials, those prayer times powerfully bonded us. Many in the city face isolation and deep loneliness, yet our home fellowship group united a diverse group of professionals with an intimacy that not only blessed us individually but also enabled us to better serve others. I doubt I could have survived as a single Christian in the city without them.

Home fellowship groups aren't New York City's only lesson in interdependence, however. The many individualistic (and well-documented) trappings of suburban life are by necessity shared in the city. Driveways and backyards are rare, leaving neighbors to share parks, stoops, and sidewalks—as well as walls and floors-slash-ceilings. Legion are stories of overheard arguments, sex and rehearsals, as well as noise-averse neighbors and toddlers who might as well be training to join a wee tap-dance troupe.

But such close proximity brings many blessings, too. Shortly after I moved to New York, I was part of a teaching audition at which a fellow applicant spent his five minutes on the finer points of street finds—the best days and neighborhoods to locate such discarded goods, and the sorts of items one might discover.

Goods I found on the streets of Brooklyn include a mid-century cedar wardrobe, a wooden desk, a futon frame (the hardware taped to one board), enough scrap wood to build myself a bookshelf, a box of nonperishable pantry goods (such as free-range, organic chicken broth), numerous books and clothing articles, including some running shoes that fit my visiting dad. You could also be fairly certain that unneeded goods you left out on a stoop or sidewalk would find a new owner in fairly short order.

Such abandonments owe in part to the scarcity of space and nature of intra-city moves. But they also bear witness to a spirit of generosity akin to that of the early church. I believe it can show a hope in redemption, to leave out things you no longer want or need, in case someone else could find them useful and valuable. When the puzzle pieces interlock like that, city life can display real beauty.

Street finds will be harder to spot from a cab or car service, but one of my hopes for you is that New York makes a walker of you. There's a radically egalitarian quality to the sidewalks there, which celebrities and beggars, students and stockbrokers, immigrants and toddlers alike share. And I found that walking was one of the best ways I could pray in the city—both for certain blocks and the people who lived there, and things going on in my own life. (I did tend to walk at night, though, when it was quieter and I could pray aloud without embarrassment.)

Some of my favorite walks in the city: across the Brooklyn Bridge at any time, but especially at night; up or down Broadway in Manhattan (a great tour of the city that can take you from the Upper West Side to Times Square and Union Square within a few miles); 22nd Street between 6th or 7th Avenue and 10th Avenue; 6th Avenue in Brooklyn, between 15th Street and north beyond Union. Whatever streets you end up walking, consider praying for one block you pass through regularly. That's what I did my final year in New York, and my prayer life has not been the same since.

Tim, you undoubtedly have an adventure ahead! May your time in New York be rich in joy and growth. I'm excited for you to experience God in and through that city.

Wishing you a fruitful stay,
Anna

Anna Broadway is the author of Sexless in the City , a memoir set mostly in New York. She now lives outside San Francisco.

"Being a Christian carries little social capital in New York, unlike places where the line between civil religion and biblical faith is blurry. Thus, the people in its churches are usually relatively serious about their faith." Funny...this is exactly the way I describe growing up in the Pacific Northwest to my friends and neighbors in Texas. No social capital for biblical faith there either.