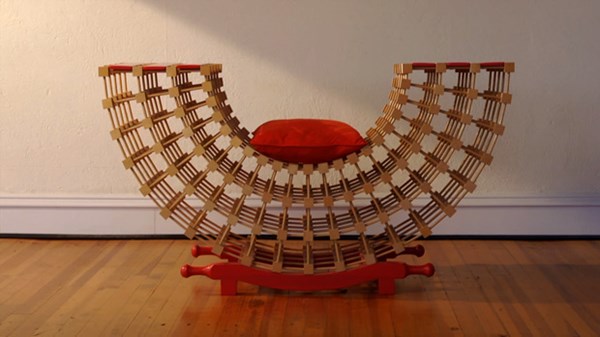 The sanctuary of our church in the core city of Grand Rapids is a throwback to another age. The windows are a lighted mural of Tiffany stained glass, their colors bounded by beaded lead lines whose gentle imperfections attest to the hands that made them. The rich oak of trim and pews evinces its own sort of warmth on cold Michigan Sunday mornings, with little details that can occupy a distracted 4-year-old during long sermons. As we say of cars and refrigerators: They don't build 'em like this anymore. The space speaks of the generations of faithful who have preceded us who didn't seem quite so captive to our pragmatic utilitarianism.

And at the front, below the pulpit, is the Communion table. On it you'll see a jar and a chalice and a tray sculpted from clay by a potter in our congregation. But only recently did I notice an interesting juxtaposition: Around the sides of the grand oak table are a series of alternating carvings of wheat and grapes, sheaves and bunches around the bread and wine sitting on the table. It is precisely into that space—between wheat and bread, between grapes and wine—that the sumptuous short film "Furniture Fit for the Kingdom," spotlighting furniture maker Harrison Higgins, invites us.

The opening might make you expect a hymn to "nature" of the most romantic sort—the kind of encomium to nature's pristine, pure, terrifying beauty that sent Wordsworth and his ilk into rapture. In such romantic views of nature, humanity is always an imposition, an interruption; our presence is the beginning of corruption. In romanticism, culture is the enemy of nature; human making is a threat to an idyllic creation.

So for Higgins, there is no simplistic opposition between nature and culture, between a pristine creation and human artifice—the creative "work of our hands" that gives birth to artifacts, to cultural goods. To the contrary, good artifice is its own kind of grace: to make is to serve, is to bear God's image to and for the creation. A Christian theology of creation is not the same as Mother Earth mythologies of "the natural" that ultimately end up lamenting humanity's presence as a blight on creation. No, we worship the Maker of all, the Artificer we come to know in Jesus of Nazareth, the son of a carpenter. A Christian affirmation of the goodness of creation is also an affirmation of artifice—redeeming the very word, we might say, from its association with the fake and the faux. In an older sense, artifice attests to creativity and craft.

Of course, as Harrison testifies (with a little help from Wendell Berry), we also need to make well. Because we receive the stuff of creation as the gifts of God, "we handle it differently." Our building should build up our neighbor and serve the flourishing of creation. That doesn't entail some hands-off non-interference policy; but it does require that our craft being carried out in a way that listens to what God's creation is telling us—to its limits, its strengths, its weaknesses, its possibilities.

In listening to Higgins and seeing the beauty of his work, I can't help recalling John Ruskin's celebration of what he called "The Nature of the Gothic" (in his classic work of criticism, The Stones of Venice). It is a stinging critique of industrialized production that bangs out mass quantities of cookie-cutter products that are all "perfect," all exactly alike, which can only happen if workers are reduced to being cogs in a giant productive machine, veritable slaves whose individuality is extinguished. In contrast, the nature of the Gothic, Ruskin noted, affirmed the unique beauty of those imperfections that were signals of the worker, the craftsman:

In the mediaeval, or especially Christian, system of ornament, this slavery is done away with altogether; Christianity having recognized, in small things as well as great, the individual value of every soul. But it not only recognizes its value; it confesses its imperfection, in only bestowing dignity upon the acknowledgment of unworthiness ….