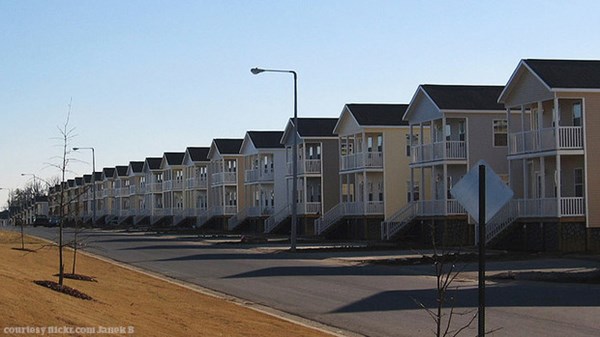 Eric Jacobsen, author of 'The Space Between: A Christian Engagement with the Built Environment,' says place matters for human flourishing.
Interview by Joseph Gorra

It's rare to find a pastor who is attuned to how "place" informs human experience and community. But a discerning pastor can know more about this than most city planners, if they are attentive to the particular shape of the lives of their congregants and their community. Enter Eric O. Jacobsen (PhD, Fuller Theological Seminary), a pastor of 14 years, the last 5 as senior pastor of First Presbyterian Church of Tacoma. "I am not a trained architect or urban planner, but an ordinary pastor who has always lived within walking distance of my church," he says.

Jacobsen's 2003 "break-out" book, Sidewalks in the Kingdom (Brazos Press), used the tenets of New Urbanism to help Christians recognize the value of local churches in local neighborhoods. Jacobsen calls his newest book, The Space Between: A Christian Engagement with the Built Environment (Baker Academic), a "more mature reflection" on the subject.

"I've lived almost my whole life in mixed-use neighborhoods where every house looks different and you could walk to the store to get milk or to a coffee shop," he says. "I live in a small city . . . with my wife, four children, and eight chickens. All of our kids can walk to each of their schools."

In his interview with researcher Joseph Gorra on behalf of This Is Our City, Jacobsen demonstrates how Christians might think about spiritual formation as it enfolds in particular spaces.

What do you mean by the phrase "built environment" in the subtitle of your book?

The built environment is the physical setting of the public realm—literally the space between the buildings.

We don't pay much attention to it because the spaces between strip malls, fast-food joints, and big-box stores don't work very well as public spaces. They are set up for the efficient movement of cars. When we go to older American or European cities, or walk around neighborhoods that were built before WWII, we get some sense of what the built environment can be.

It seems that getting out and about is the first key to understanding the built environment.

Can you offer an example?

When my family lived in Pasadena, we deliberately chose a church, school, and activities to which we could walk. Because this was Southern California, everyone thought we were crazy, even though we were only walking distances less than a mile. But over time, our friends and neighbors joined us in walking and biking. It was fun to see how this changed not only how we experienced the built environment, but also how we related to one another. Walking or biking together to school provided a way to interact with our neighbors and their kids that wouldn't have happened if we had all been in separate cars.

As a pastor, how has your leadership been affected by engaging your built environments?

If human embodiment is core to experiencing community, has the "suburban experiment" failed?

The best way to answer is through analogy. A city is like a pizza, and a neighborhood is like a slice of pizza. Just as a slice of pizza should contain all the ingredients of the pizza, each neighborhood should contain all the things we enjoy and value about the city: homes, coffee shops, ball fields, churches, grocery stores, and so on. The suburban experiment that was so influential in the 20th century involved dividing up the functions of the city into different zones: housing, shopping, office, recreation. This works about as well as eating the elements of your pizza in different courses: you're still getting the same nutritional value, but you've lost the joy of your pizza.

I think we're starting to realize that the suburban experiment has not done a great job of providing a satisfying experience of human community, and we're interested in building neighborhoods again.

Over the past decade we've finally figured out that we can damage our experience of human community by designing homes and subdivisions that encourage isolation. But the pressing question now is whether we can fix the problem simply by changing our building practices. One way to frame that question is, If we re-learn how to build neighborhoods, will people automatically start acting neighborly again? I think the answer is 'no,' but it leads naturally to the question, What can the church do to help rebuild a sense of community in our neighborhoods?

Does our own busyness contribute to our disconnectedness from place?

One of the great ironies of modern life is that the people who live in "advanced" cultures, which have an abundance of resources and employ time-saving devices, tend to be more harried and stressed out than people who live without these amenities. I think that this is because the more advanced cultures tend to treat time as a commodity that can be saved and spent at will.

We become intoxicated with a sense of power over the hours of our days, and it causes us to push ourselves harder and separate ourselves from the people and places of our lives. When we can get past that illusion and see time as a gift to be received with humility, we will find that our experience of time connects us to the places we live and the people we love. Traditionally, the built environment was a key element of receiving time in a gracious way.

With our identity and vocations, you say in the book, we communally participate in our built environments as a family unit, as the gathered people of God, and as a polis. Why are these three so meaningful?

Well, our first impulse in dealing with complicated issues is to reduce them to the kinds of choices we make as autonomous individuals – namely consumer decisions. "Oh, the environment is in trouble, I'll buy a Prius instead of an SUV." When we've done that, we feel like we've addressed the issue and we continue to live our lives as we always have. But if we're honest with ourselves, we discover that most of the truly pressing problems we face cannot be solved solely by making individual consumer choices, but require changes at the communal or institutional level. In the Bible, we see three institutions named: the family, the church, and the state. It turns out, rather non-accidentally, that these are the fundamental units of society through which we can shape our built environment in meaningful ways.

How do these units of society shape the built environment?

We shape the built environment as families when we decide on the home that will contain our family life. That home as a physical object shapes the built environment directly, but it also will become a key determining factor in a whole web of travel paths as we get ourselves to work, our kids to school, and everyone to various activities and shopping.

Churches shape the built environment either by becoming a key gathering spot within a particular neighborhood or by becoming a kind of alien presence in a neighborhood where a whole bunch of cars from 'who knows where' show up intermittently throughout the week, but especially on Sunday morning.

And the polis shapes the built environment as neighbors get to know each other and start to take an interest in the shared public space surrounding their homes. They can do things on their own – like developing block-watch programs – and they can use their collective voice to advocate for neighborhood amenities like benches and street trees.

Joseph E. Gorra is the manager of academic programs and research for Biola University's graduate program in Christian apologetics. He is also a contributor to the Christian Research Journal, for TheGospelCoalition.org, the Journal of Spiritual Formation & Soul Care, and for Patheos. As the founder and director of the religious nonprofit Veritas Life Center, he is interested in understanding how Christian knowledge and wisdom shapes life and flourishing. He can be followed on Twitter @GorraResearch.