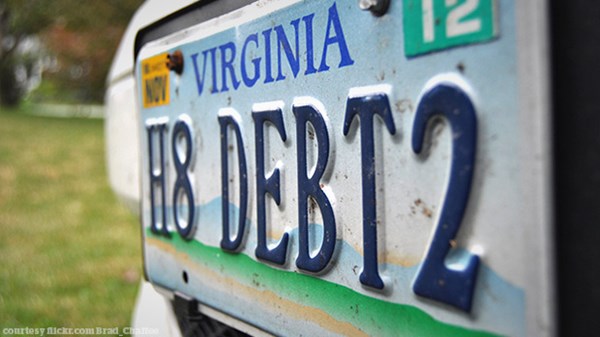 The Moral Case for Debt

Why borrowing money is crucial to pursuing the common good.
Boyd Clarke

If "debt" were a brand today, it would be in roughly the same place as Tylenol was in 1982, when the drug was pulled from the market due to concerns over tampering. In other words, debt would be associated with lethal toxicity and a corresponding loss in the value of the brand. "Collateralized debt obligations" and the fallout from their collapse in value have nearly brought down the economies of the developed world since fall 2008. Greece and Spain have become synonymous with excessive government spending and unsustainable debt levels, the national U.S. debt level is a critical issue in the 2012 presidential campaign, and student loans have reached levels where many are asking whether they'll be the next "bubble."

Amid these sobering developments, many individuals have sought to reduce their debt levels, while businesses have found it harder to get debt financing to expand their activities. This helps explain why recovering from the Great Recession has been sluggish. It also helps to explain why bankers are viewed by many as the moral equivalent of tobacco farmers: practicing a legal trade that profits from the ill effects it generates for others.

It's hardly surprising that a discussion of debt in our economic system elicits a variety of theological responses, all of which appeal in some way to biblical authority. Among theological conservatives are groups like Crown Financial Ministries (the successors to Larry Burkett, an evangelical voice who advanced a similar agenda late in the 20th century). Crown emphasizes reducing or eliminating individuals' debt as part of an effort to immunize Christians against the effects of financial crises. Among theological progressives are groups like the Presbyterian Church USA, which has tried to move money from the large banks associated with the foreclosure crisis, and called for a fundamental change in the global financial system, all in the name of biblical justice. In the meantime, businesses large and small continue to need capital, and Christians engaged in such businesses (or, for that matter, banks) need to understand how the Bible might apply to debt in the context of our modern economy.

Let me address a few points off the bat. First, at first glance the Bible does indeed discourage the recourse to debt. The Old Testament includes prohibitions against usury, and in the name of economic justice, detailed regulation of the forgiveness of loans in the sabbatical and Jubilee years. In the New Testament, Paul admonishes the church in Rome to "let no debt remain outstanding, except the continuing debt to love one another."

Second, in the United States both before and after the financial crisis, levels of personal debt are too high, and savings rates are too low. So encouraging individual Christians to reduce their debt levels and save more is both sensible and helpful advice. But what do these Scripture passages mean for macroeconomic policy, and how Christians might think about the financial crisis? As devotees of Keynes and Hayek are locked in a political struggle about the use of governmental debt to stimulate economic growth, do the Bible verses that talk about money offer guidance?

When we take the word debt and its allied concepts from the Bible and transpose them literally into our 21st-century economy, I wonder if we are not running afoul of misinterpretation. In biblical times, there were generally three ways to use money: You could consume it, you could hoard it, or you could give it to the poor. Hence, Bible passages that talk about money, wealth, and even debt tend to reflect that perspective. There was little, if any, understanding of the predominant focus of capital in our economy: You can invest it to generate economic growth and thereby increase the overall wealth and well being of a society. (The Parable of the Talents in one biblical example that reflects this understanding of wealth.) The economy of biblical times was agrarian, rigid, illiquid, and Malthusian in its demographics—meaning that as the population grew, the economy food supplies did not grow sufficiently to support the additional people, and poverty and famine spread as a result. In contrast, our economy is post-industrial, dynamic, highly liquid (notwithstanding the challenges brought on by the financial crisis), and certainly post-Malthusian.

Think about the meaning of the word debt in those two economies. In the former, debt was inevitably a one-way trip to some form of bondage; in the latter, debt, when it is not used simply to finance conspicuous consumption, can have a very different profile. In other words, debt as referenced by Paul and debt as referenced by Ben Bernanke in his sessions with Congress are homonyms. They are spelled the same, but they mean two different things.

In 2001, I was the CEO of a relatively small vaccine company that was trying to bring to market a new type of flu vaccine. It was sprayed in nose instead of injected, which made it desirable for the immunization of smaller children, who at the time were either more likely to get seriously ill from the virus, or who were very effective vectors for transmitting the illness during an epidemic. Developing any vaccine is enormously expensive, and ours, because of its potentially wide application, was particularly so. In the 10 years that our company had existed, it raised and spent some $700 million on vaccine development. And as we got closer to market, annual expenses began to approach $150 million. Without any sales or profits, we had two choices: We could sell equity (for which there was some appetite, but not enough), or we could issue convertible debt. We did both, with help from some of the big investment banks that the public has come to loathe. With an adequate capital base (including over $200 million in debt-sourced cash), we were able to licenseg the vaccine, and we eventually sold the company. The people who loaned us the money made money, and the vaccine was approved ultimately by the FDA. It is now widely used, particularly among children.

As a businessperson, I am pleased that those who provided us capital got a return on their investment; as a Christian, I am more pleased that thousands of youngsters who may well have come down with a serious infection did not because of the vaccine we were developing. And yet, none of it would have happened without debt, or the banks that enabled us to get the money.

I am not saying that when it comes to macroeconomic policy or personal finances, increased leverage is necessarily good or bad. Many factors are inevitably at play, and Christians involved in both big companies and individual investments will need to discern what is wise in each situation. Rather, as we face the complexities of modern economic life, we will need to say more than simply pointing out there are over 2,000 Bible verses that address money. And we may need to do more than rail against banks writ large, in the name of economic justice.

Rather, we need to include the concept of promoting the common good in both our reading of Scripture and in our understanding of modern-day debt. Human flourishing is a fundamental component of the plan of God. As a result, using economic and business tools, including, yes, borrowing money, to pursue such flourishing is consistent with the themes of Christian service. It is in this light that the recourse to debt must be examined. So the question of taking on debt becomes different. It is not a case of what you are borrowing, but for what are you borrowing.

Boyd Clarke has had a 35-year career in the pharmaceutical and biotechnology industry. He is currently Executive Chairman of LigoCyte Pharmaceuticals, a small private vaccine development company.

The great majority of our debt is owed to Social Security. However some of it is borrowed from other countries. This is not a justification for taking on more debt but just a fact. The last dollars of debt is indeed borrowed from people or governments in another country and as Social Security pays out the money that the program is currently owed, the debt will have to be replaced with money from other places.

Mr Clarke : You gotta be kidding. The obscene $16 trillion debt we have saddled future generations with is tantamount to 1. Taxation without representation 2. Indentured servitude to foreign governments from whom the money was borrowed. I am thrilled that you could make a wise business decision about debt---a calculated decision knowing that you could probably repay that money borrowed from banks who agreed that you would be able to repay it. Compare that to our corrupt, irresponsible politicians borrowing from foreign governments who KNOW we cannot possible repay or even pay down such debt any time soon. So. How much IS a trillion? One million seconds = 12 days One trillion seconds = 31,688 YEARS. YEARS! www.swineline.org/media Remember that on Nov. 6th.

The author's vaccine company took on debt as a calculated method of becoming productive and successful - which it became. The mountain of debt owed by the Federal Government (read our children and grandchildren) was incurred in order to buy political favor under the guise of "helping people." Though people were "helped," the net result of the enterprise has been no change in the poverty rates, nanny-state dependence at the expense of fatherhood, and a bloated bureaucracy consisting of government union employees with no purpose beyond maintaining the gravey train. Inefficient, counterproductive and ultimately a disaster for every one of us. There has to be a better way.

Is this argument for debt supposed to make us feel good about 16 trillion of debt, borrowing vast sums from the Chinese, failed stimulus packages, Government loans to Solyndra, mortgaging our children's future? Cuz I'm not feeling it. To say that debt is much easier to incur and has less draconian penalties than Biblical days is reckless and there is a train wreck coming for us all that will make 1929 look tame.

The Moral Case for Debt