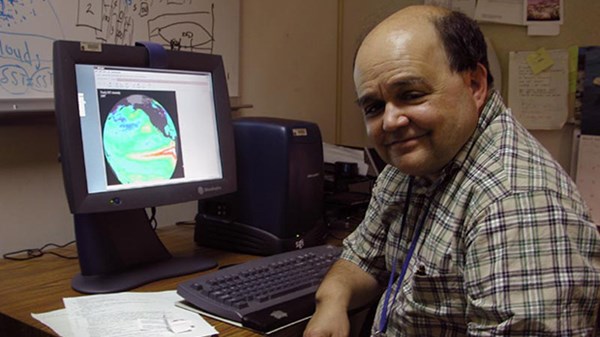 Jorge Vazquez moved from Cuba to the United States as a toddler. He grew up far from the sea, in West Virginia, where his parents taught at a local college. But he cherishes memories of taking long walks along the beach with his father, a biologist, when the family would visit relatives in Miami, Florida. "[On our] long walks on the beach, he'd point out jellyfish on the shore, or algae, or different organisms," says Vazquez. "He had this deep appreciation for God's creation."

Vazquez returned to the Sunshine State for college at the University of Miami, then earned his master's at the University of Rhode Island's School of Oceanography and a Ph.D. from the University of Southern California. Since 1984, Vazquez has worked at the NASA Jet Propulsion Laboratory (JPL) in Pasadena, California. For the past decade he has been part of the JPL Group for High Resolution Sea Surface Temperatures, an international group of NASA scientists and scholars studying climate change. Vazquez says, "I study the world's ocean from my computer, using data from a series of NASA satellites that orbit Earth . . . to measure how climatic changes affect local regions like California's coast."

Vazquez recently spoke with Kingdom Calling author Amy L. Sherman about how his scientific pursuits as an oceanographer contribute to shalom in his community and in the wider Creation.

Your dad was a Christian. How did his faith—and belief in a Creator—affect his approach to biology? Did his sense of wonder lead to your own interest in the sciences?

Absolutely. My dad was a person of faith. [On our] long walks on the beach, he'd point out jellyfish on the shore, or algae, or different organisms. He had this deep appreciation for God's creation. I remember one time growing up, he called the police because he saw people who were intentionally killing opossums. He was so upset about it. That's how much love he had for God's creation. He really instilled that in both my brother and me.

Tell me about how you became an oceanographer.

For me it was a matter of going back to my first love—and that was studying the beauty of God's creation. I love the outdoors—skiing, the mountains, the ocean. I started out as a pre-med major at the University of Miami, taking a lot of biology and chemistry. I was doing okay, but my first lab dissection, of a rat, made me realize that was not my calling. My advisor encouraged me to switch to physics and I did, and I was doing okay. But I realized I am a visual person. I can't see an electron. I can't see a proton. I realized that I can see the waves and currents, I can feel the wind. So at that point I decided to go into the environmental sciences. I was getting back to what I love, which is the ocean.

How much of your daily work is actually done outdoors?

Great question! Right now it's much more on computers than anything else. When I was a student at the University of Rhode Island, we went out putting instruments in the Gulf Stream, and we got caught in a tropical storm and 30-foot seas. The entire scientific party was seasick. Whenever people ask me about my faith, I tell them that one of the times I would have loved to have been with Jesus was when he calmed the seas. That would have convinced me!

After that experience, I made the conscious decision to study the oceans from a more stable platform. But now I'd like to get back to doing more fieldwork. When you have a satellite measuring something from outer space, you have to make sure it's right. You have to have instruments in the water telling you what the satellite is doing and that the models you are running are correct.

You came to California in 1984 to work with NASA's Jet Propulsion Laboratory. What, in layman's terms, is the mission of JPL, and what is your research focus?

The focus of the group is on climate change, global warming, and using current satellite technology to better understand the impact of climate change on our planet. These days, many countries have launched their own satellites and space programs. So we are trying to collaborate with different countries in coordinating all the data information from satellites in ways that researchers all over the world can access.

Right now my particular research is on trying to understand the impact of climate change on coastal areas. For example, I'm working with Peruvian scientists to apply the satellite information to better understand how El Nino and La Nina are going to impact the coastal areas of Peru.

Why is this sort of research important?

These issues have huge economic impacts on countries. They have huge biological impacts. In Peru, the biological issues tie in closely with the economic, because their economy is heavily based on fisheries. So anything that changes the fishery industry of Peru is huge and can have devastating effects.

Are you learning things about the effects of climate change on the coastal areas of Peru that are also relevant to California coastal waters?

Absolutely, because California has a similar ecosystem. In California, the dynamics of the ocean are similar, the fisheries are similar, and the coast also gets affected by El Nino and La Nina.

'So far this is the one unique planet we know of that has everything necessary for life. So we need to treat it as a gift.' ~ Jorqe Vazquez, NASA

As a Christian how do you think your work as an oceanographer participates in God's own work in the world?

It's stewardship. I confess, within the evangelical community I get frustrated because sometimes when you talk about environmental issues, the response is, "So what? God can put everything back together anyway." That's exactly the wrong attitude to have, and it doesn't fit with our call to stewardship. Just like a child is a gift from God, a friend is a gift from God, a spouse is a gift from God—I think this planet is also a gift from God. So far this is the one unique planet we know of that has everything necessary for life. So we need to treat it as a gift. I think God calls us to that very explicitly even in the first chapters of Genesis. All the evidence is pointing to the fact that we as humans being are having an effect on the environment, and a negative one. It's very clear we should be concerned about this, and that drives what I do.

Are you optimistic or pessimistic about the likelihood of more Christians getting engaged in efforts to care for the environment?

From my admittedly small sample, like the church I attend, I'm very positive. I've been asked twice to give talks on this issue. People are discussing it. There was a lot of positive feedback. Also, I've taught for about eight years at Azusa Pacific University. The students are excited about understanding creation care. So I think attitudes are changing for the better.

And what about the issue of global warming?

My colleague Josh [Willis] once said to me, "You know, Jorge, God designed his creation in more ways than one [to account] for our sins." The point that Josh was making was that God designed this planet in light of our sins, including the sin of not taking care of it the way we should. I won't go into all the scientific issues, but the fact that our planet is more ocean than land is a very positive thing in terms of stabilizing the climate. If it were the other way around—more land than ocean—then even right now the planet would be way too hot, and the impacts of global warming would be a lot worse than what we've seen. The fact that this planet is mostly oceans gives us a lot more time to solve this issue of global warming. The oceans are the key. There has to be a Creator behind this because he understood how much we would mess things up in the Fall. The way God designed this planet is a revelation of who he is, his character—it is another example of his grace.

Every time I look at the complexity and beauty of the universe, I think, You can't create the kind of complexity we have without a creative force behind it. You just see a design behind everything. And everything I'm doing now, in terms of addressing global warming, makes me hopeful, because I think God has designed this planet knowing all our sins from the very beginning, and he's giving us more time to get our act together.