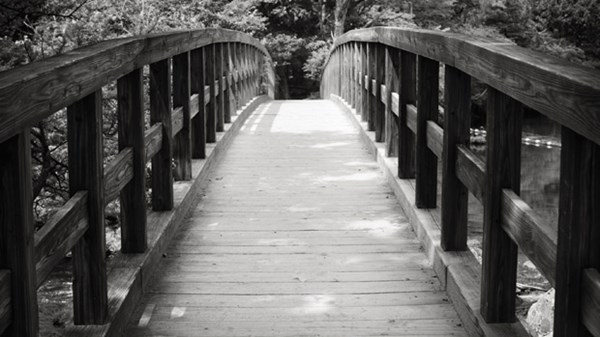 On a Friday night in January, we lingered in the home of Sheikh Khaled. The sheikh is a professor in Muscat, Oman, where for two weeks I was studying Christian-Muslim relations. In the sheikh's majlis ("sitting room"), we were treated to a sublime meal—including an unforgettable sesame dipping butter for Omani dates, the best of which come from the region where frankincense has long been native.

As the evening progressed, the conversation drifted to Muslim-Christian dialogue. But neither global jihad nor Trinitarian theology were on the menu. Instead, the sheikh offered this main course: Several years ago, he had read the entire Bible. He then grabbed his Arabic translation of it, turned wide-eyed to the Gospel of Mark, and pointed out, for him, one of the most compelling stories about Jesus. The moment was image-defying, a testament to the sheikh's Qur'an-induced respect for the Christian holy book.

Can American tables withstand such conversational weight? I thought. If so, what are the common-good possibilities for peacemaking? And, as American Christians, what might it mean to genuinely contribute to our Muslim neighbors' flourishing?

About three years ago, at Virginia Commonwealth University in the heart of Richmond, the Virginia Baptist collegiate ministry began to answer this question by launching Holy Books Conversation (HBC)—a biweekly, scripture-centered dialogue between Christian and Muslim students. Together students read a selected text from the Bible and the Qur'an, seeking to discover commonalities and to clarify differences. Our conversation humbly attempts to marry curiosity and openness toward the other’s scriptures (like a thoughtful guest) with a passion to share and discuss our own scriptures (like a generous host).

Formed with key leaders within the Muslim Student Association at VCU, often I facilitate the HBC, which provides a table for an experiential encounter between the Shanes and Waleeds, the Amandas and Kairshmas. On average, six to eight students participate—the locations for our interactions varying from a Lebanese café to the Student Commons to our current space, the living room of a red row-house recently converted into the Virginia Baptist student center, which we call the Center at VCU.

From a Christian perspective, HBC is rooted in Jesus-shaped reconciliation. We desire to break down cultural and theological barriers and to bring people nearer to God and to each other. In so doing, we are joining God's blessing of the families of the earth, channeling the ancient call of Abraham, who was ever-looking for a peculiar city.

The sons and daughters of Ishmael—if not by lineage, by sacred history—are here. Some of them are from here. And in Richmond's old city, the pain caused by stark divisions certainly provides a modern canvas on which to color a new post-9/11 American story. It is not inconsequential that three or four Christian students, mostly from conservative churches, are talking with three or four Muslim students. Over the past two years, we've had conversations against the rancorous national backdrop of the Ground Zero mosque; a Qur'an-burning pastor in Florida; congressional hearings on alleged Islamic radicalization in American mosques; a tide of Shari'ah mischaracterization and scaremongering; and the clandestine police surveillance of Muslims, including students, in New York City.

Meanwhile, the HBC dialogues have explored the story of Joseph from both the Bible and the Qur'an and delved into each tradition's understanding of personhood and marriage. Guest guides from both faiths—imams and Christian seminary professors—have facilitated a fraught subject: nonviolent resistance or fighting in the name of God.

We are seeing HBC open doors to pursue the good of Ishmael and to envision Abraham's city—through meaningful acts of Christian hospitality, natural pathways for friendships, and exposed contours for a certain kind of Christian witness.

Chawkat Moucarry, director of Interfaith Relations for World Vision International, says categorizing dialogue as verbal engagement is a narrow view: "Dialogue is first of all about an open attitude toward others, a disposition that reaches out and welcomes people who are different or even antagonistic." Christian hospitality flows from God’s generosity to us in Christ, and it is often what the stranger most needs.

Last year, one of HBC's Muslim participants, a psychology major, dropped by the Center. One hour later, we were discussing Christian and Muslim views of professional counseling. The student is now serving Richmond as a youth counselor in the Chesterfield County Juvenile Justice Detention Center. This spring, our collegiate ministry began resourcing the "ministry" of our Muslim student neighbors. On Friday afternoons, in our Center, the Muslim Student Association prepares meals to feed the homeless of Richmond's Monroe Park.

One of the most developed Christian-Muslim friendships to come out of HBC resulted in friends driving a truck around town on Saturdays to pick up used furniture for a nonprofit. One minute these students were talking about the role of hardship and suffering in faith; the next they were serving an organization that blesses the least of these.

Finally, yes: Christians and Muslims are commanded to give a witness to the truth that God has revealed. Both faith communities offer differing internal perspectives about the relationship between dialogue and that witness. What we've discovered is that a text-oriented conversation can allow for a faithful gospel witness, if substantially girded by the values of respect and freedom.

Describing evangelicals' witness among Muslims, Rick Love, president of Peace Catalyst International, urges that "love for God and love for neighbor shape the expression of our witness to the nations." So, for instance, in our series on personhood and marriage, Ephesians—containing the central Christian inspiration for self-giving marital love: the cross of Jesus—could not be avoided. The text itself placed the gospel conversation on the table. But respect and freedom also demanded that we navigate the conversation in a manner consistent with the very subject at hand.

Back in the sheikh's house in that far-away city, it was not lost on me: I had encountered this Muslim and his faith in a fruitful, engaging way because a space for such encounters had been created. On that Arabian night, the sheikh generously blessed me.

With VCU so integral to the life of Richmond, we believe our Holy Books Conversation serves as one reply to a pressing question with an emphatic twist: Does our Christian vision for flourishing cities include the well-being of all the families of the earth, and, in this case, a family so dear to Abraham's heart?

Nathan F. Elmore is working toward a M.A. in Islamic Studies & Christian-Muslim Relations through Hartford Seminary. He serves the Virginia Baptists as collegiate minister at Virginia Commonwealth University and recently joined Peace Catalyst International as a program coordinator and consultant. He writes at nathanfelmore.com.

First, the sons of ishmael would only include a percentage of today's Muslims in a small portion of the middle east. Many middle eastern peoples are not blood descendants of Ishmael. Certain, Indonesian and Pakistani Muslims have no blood relation to Ishmael. Second, we should win friends but we also need to dialogue to win. I mean, win people's minds and hearts to Christ through dialogue and Gospel proclamation. We cannot accept the Coran as equal to the Bible for example nor can we lightly gloss over very strong differences. Further, this will not always be peaceful especially when dealing with many less- moderate muslims who literally hate Christians and Jews. Christians homes and churches are being burned daily by Muslims in Nigeria, Pakistan, etc... We cannot pretend this is not happening. We cannot pretend that biblical principles teach that Mohamad a false prophet and that the Bible does not teach that the coran is false. The coran teaches the bible is erroneous... Real problems

I firmly believe that the gospel calls us to win friends and not arguments. Therefore, respectful,knowledgeable dialogue is always helpful. Someone said that,'a friend is someone who knows the worst of you and loves you anyhow'. Believers in Christ must put aside all that is negative about Islam and love its adherents if the Muslim world is to impacted by the gospel. People deeply immersed in their faith are always hard to reach with the gospel. Love is the only way to bring them to the surface. This, and being able to disagree without being disagreeable. Christian presented with the opportunity should befriend Muslims, with the intention of bringing them to Christ, yes! But also with the desire to learn about them while at the same time graciously exposing them to what it means to be a follower of Christ.

So the author never did talk about "Trinitarian Theology" with her friend. It was too close to sounding like "global jihad" eh? (The author did address them in the same tone) "So, for instance, in our series on personhood and marriage, Ephesians&mdash;containing the central Christian inspiration for self-giving marital love: the cross of Jesus&mdash;could not be avoided. The text itself placed the gospel conversation on the table." So when cultivating a relationship with people of another faith, we should only talk about the Christ, about a Triune eternally relational God who became one of us (incarnate) to establish a relationship with us, if we are backed into a corner?