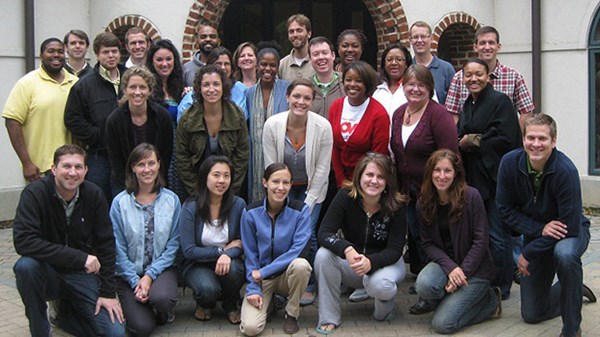 The qualities that have made the Richmond Christian Leadership Institute flourish in five years are key to any leadership program, anywhere.
Andy Crouch

A few years ago, I found myself in a room with more diversity, intelligence, and energy than I've experienced almost anywhere else. It was a spring Saturday morning in a suburb just west of Richmond, Virginia, and gathered in a meeting room of a pleasant nondenominational church was a group of about 50 people, most of them young adults, all of them keenly engaged in a series of sessions about faith and cultural responsibility. These students, instructors, and mentors for the Richmond Christian Leadership Institute (RCLI) were nearing the end of their ten-month-long immersion in the opportunities and challenges of cultural leadership in the city. The next month, they would be meeting again, this time in an inner-city African-American church. RCLI is a moveable feast.

Only five years old and limited to about 30 students per year, RCLI is already having an outsize influence on the city of Richmond, and on the Christian community there. Its influence hinges on its innovative approach to civic education. Its participants come from every sector of culture—primarily business, nonprofit organizations, and local government—and from a vast array of neighborhoods, churches (53 different churches have been represented by RCLI's 151 participants to date), and ethnic and racial backgrounds. What they share is a serious commitment to Christian discipleship, some demonstrated capacity for leadership, and a love of their city. And after ten months together, they have something else in common: an in-depth education in Richmond's history, culture, neighborhoods, government, and economy. They also have friendships with fellow emerging leaders they would never have met any other way.

RCLI's approach to training the next generation of civic, business, and church leaders is a good measure of the health of the Christian community in Richmond, and Christians' commitment to the health of their city. I believe RCLI, both in the details of its programs and the philosophy that has shaped its work, comes as close to a secret of Christian civic renewal as you're ever going to find. At least if a tremendously challenging, multifaceted effort based on decades of investment, learning, reflection, trial, and error counts as a "secret." It has several qualities that could be borrowed for culture-making efforts almost anywhere:

Intentional diversity. Most American cities are economically and ethnically diverse. But the very complexity and relative anonymity of city life means that, paradoxically, cities make it easier for individuals to cluster with people like themselves. Just because the sidewalks of your city are diverse doesn't mean that the people on those sidewalks have deep or trusting relationships with many people with different background or beliefs.

Beginning with the first planning meetings, RCLI has been intentionally diverse, with its majority-culture leaders investing countless hours in learning from and taking direction from minority-culture leaders. "Being truly diverse is slower, it's more painstaking, and it takes a ton of effort, but we think that it is God's vision for this world," founder Fritz Kling says. (Kling has also volunteered his time as a senior producer for This Is Our City's coverage of Richmond.) "And we're fortunate to be in a city that really doesn't allow us to be otherwise." RCLI's very first session was held at one of the city's largest African American churches—a step that required Kling to invest months in relationship and trust-building.

Focus on infrastructure. What does zoning have to do with Christian values? A lot, it turns out—as do transportation, public health, and law enforcement, to name some of the other subjects RCLI classes cover in depth. Several RCLI alumni mentioned to me that the session on regional land use had been one of the most eye-opening of the whole year. A topic that would do well to attract a handful of citizens to a committee hearing turned out to be critical for understanding the fault lines between the city of Richmond and its surrounding counties.

My friend David Blair, an Air Force pilot and Georgetown Ph.D. student doing research on combating criminal networks for human trafficking, has a pithy saying: "Amateurs think tactics; professionals think logistics." In other words, it's easy to imagine a new program or policy that would benefit your city; but the real work is in the blocking and tackling that make that program effective and sustainable. Cultural change at the level of a metropolitan region happens because of seemingly mundane choices about transportation routes, tax rates, building codes and covenants, and other things that only a few professionals—and of course the business leaders whose interests they serve or conflict with—take the time to care about. Real leadership in a city requires "thinking logistics" over a decade or more. By introducing young leaders to these topics, RCLI ensures that many more influential Richmonders will be engaged in these issues in the decades to come.

Attention to history. Several years ago, while working on another Christianity Today project, "Where Faith and Culture Meet," I had the privilege of meeting a First Nations leader named Tal James who was working toward healing and reconciliation from the legacy of Canada's misbegotten residential schools system. "The fruit of the past is the present," Tal said. Our view of our cities tends to be like a portrait taken with a very shallow depth of field—the present is clearly in focus, but the past in the background is fuzzy at best. But the present is the fruit of the past, the sum of a long history of choices made by, and choices forced upon, the generations that came before us. RCLI works hard to bring the centuries-long history of Richmond into focus, so that the next generation of leaders understands just how long it took to create the city that they see today, and how long it will take to see comprehensive flourishing emerge.

RCLI's first session each year includes a tour of Richmond's five centuries of history, beginning with the English arrival, stopping at the site of America's second-largest slave market, and continuing to the present—an introduction to the complex and often tragic history of a city that was at the center of the slave trade and the Confederacy and has borne the brunt of 20th-century "urban renewal" as well as the complex opportunities of 21st-century gentrification.

Intergenerational relationships. Although RCLI is targeted at young adults, it's not a generational ghetto. Each small group has an older volunteer who joins them for the weekend meetings and often hosts informal gatherings as well. One of the great weaknesses of contemporary American urban life is the way it segments us not just into niches of ethnicity and class but also into age cohort—something you can see at any neighborhood bar as well as many a neighborhood church. Any program that can deepen social networks across generations has a tremendous advantage in building long-term influence in a city. Unfortunately, even churches can't be counted on to bridge this gap—but RCLI has intentionally worked to do so, simultaneously benefiting its younger participants, older volunteers, and network of leaders.

High cost. RCLI is not particularly expensive to its participants in dollars—class members pay $500 for the year, compared to thousands of dollars for leadership programs run by Rotary Clubs and Chambers of Commerce in Richmond and other cities. (Even that fee is negotiable for those who have trouble affording it.) But it is expensive in the one currency we all have the same amount of: time. The program requires one Friday night and one full Saturday each month, plus a longer retreat at the beginning and end of the program. Further, participants are encouraged to spend substantial time reading ahead of each meeting and getting together informally with their small group at others times during the month. That is a major investment of time for young professionals.

And rightly so. If there is one mistake I think Christians tend to make in the competition for attention in our consumer society, it is to lower our expectations for commitment to try to attract someone—anyone—to be involved. But nothing worth doing can be done without deep commitment—and of course Jesus' own Galilean leadership institute required most of its students to quit their jobs altogether. The kinds of learning and relationships that RCLI forms, challenging prior assumptions and building relationships across unfamiliar differences of race, vocation, and class, simply can't happen unless people are willing to commit. The greatest temptation in a society that worships scale is to try to go too big, too fast, by asking too little. RCLI, at 30 students per year, stays small and asks a lot—and every year its application process becomes more competitive. My bet is on that model for real, lasting influence in Richmond—or anywhere.

Andy Crouch, author of Culture Making (InterVarsity Press), is special assistant to the president of Christianity Today and executive producer of This Is Our City.

David, you are right. This is a mild form of Christian Reconstructionism or dominionism. Its practitioners are building a Christian society just as the Catholic Church built a Holy Roman Empire. It does not need evangelization as a justification, they are reforming the institutions of society and making them over into a Christian Utopia.

Les - thanks for the comments. We've been asking similar questions about the stories of cities. In fact we made a short film about it. http://www.christianitytoday.com/thisisourcity/richmond/markingsingrace.htm l

My problem with this is that it reduces the definition of Christian to collection of ethics and values that are then useful to the culture. It also promotes a kind of dominionism where Christians gravitate to the levers of political and social power. As Andy Crouch says, it is “logistics”. I am suspicious of any group calling itself a “Christian Leadership” group that talks logistics. Was that really Jesus intention that we should perfect the instituitions of society till we finally have a “Christian” utopia, then He returns? Sounds like the Holy Roman Empire to me. It sounds like the temptation offered to Jesus in the desert. As the author of Hebrews says, “Here we have no continuing city”, we are looking for a “the city which has foundations, whose architect and builder is God." Not Egypt, Babylon, Rome or even Richmond.