He's Risen, Just as He Said

We all have a Mary Magdalene moment.
Anne Peterson 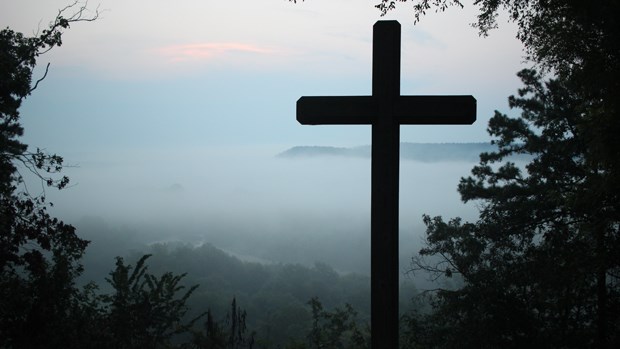 She awoke with the same ache, disappointed it wasn't a bad dream. He was gone. The one who knew her the best and loved her the most was gone.

Putting on her sandals, she was ready to go. It would be her last act of love. It gave her purpose to somehow feel connected to him. She walked out, closing the door behind her.

Thoughts filled her troubled mind. Questions without answers. How could the person she had relied on most be gone? How could she look into all the other faces filled with despair and still manage to put one foot in front of the other?

She had lost others, but this was different. He was different. He always seemed to know what she was thinking, how she was feeling. He really listened when she talked, really cared. How could she go on without his acceptance? She didn't know; but for now she was glad she had this chore ahead of her. Not really a chore, more of a privilege. It was the least she could do after all he had done for her, the very least.

Noticing the sun shining, she secretly wondered why. Sometimes it's more bearable if nature reflects our feelings instead of blatantly contradicting them. She saw the green of plants and the blue sky, but they lacked vibrancy, as if she was looking through a cloudy lens—and then she realized she was. Her whole world had changed. His death changed everything.

Sighing, she continued her short journey. She would be there in moments. But when she reached her destination, something seemed different. A few feet before her was the tomb, but the large stone that once covered the opening was now rolled off to the side.

Without a thought she ran inside, gasping at what she saw, or rather what she didn't see. He wasn't there! Someone must have taken him. Her sadness was replaced with shock and confusion. Who would do such a thing, and why?

Wasn't it bad enough that he suffered so—the humiliation of the Cross, the jeering crowd, the total disrespect for one who only thought of others? Hung on a tree, he suffered silently. Her thoughts of his crucifixion were interrupted by the stranger before her, who she surmised was the gardener.

"Sir, have you seen him?" Her tears flowed without apology. "Just tell me where they have laid him, so that I may attend to him."

He just looked at her, this stranger before her, almost as if he knew her. "Mary," he said gently.

And then she froze. She knew that voice. Falling on her face before him she called out, "Teacher, teacher," while her shaking hands encircled his ankles.

"Don't hold on to me now, Mary, for I have not yet ascended to my Father. Quick, go tell the disciples."

And then with a strength she didn't recognize, she got up and looked into his familiar face. Her heart nearly burst through her chest as she ran to tell the disciples what she had seen. The door had barely opened when she cried out, "I've seen the Lord! I've seen the Lord. He has risen just as he said!"

How incredible that moment must have been—to have been immersed in grief, totally lost, and suddenly to be overjoyed at seeing him. I had a similar experience in 1971.

I had recently experienced the loss of my parents when I was invited to a Bible study that met in the basement of a woman's house. Walking through a gate, I made my way to the back entrance. Welcomed in, I found a chair and helped myself to a bottle of soda from the fridge. Bibles were piled on the ends of long tables along with small stacks of paper for note-taking. Bowls of potato chips and pretzels were strategically placed throughout the room, but all eyes turned to a woman named Lois Peterson who wore jeans and long dangling earrings.

After assigning Bible verses to willing participants, she began passionately explaining what the verses meant. I found it easy to learn in that atmosphere as she paused to ask if there were any questions. I wanted to know more about this Jesus she seemed to know.

Lois explained that God loves us so much, he sent his Son to die on the cross for us. Although Jesus lived a perfect life, he hung on the cross and said, "It is finished," as he made a final payment for our sins.

But she also shared a verse that shook my foundation. Isaiah 64:6 says, "All of us have become like one who is unclean, and all our righteous acts are like filthy rags; we all shrivel up like a leaf, and like the wind our sins sweep us away."

I sat condemned. I saw I needed her Jesus.

Like Mary Magdalene, that was the night I met him, the night he became my risen Savior. God loves us so much he meets us where we are. He met Mary outside the tomb. And me? Well, he met me in a basement!

Anne Peterson is a poet, speaker, and author of over 42 published Bible studies. You can learn more about her at www.annepeterson.com.

He's Risen, Just as He Said