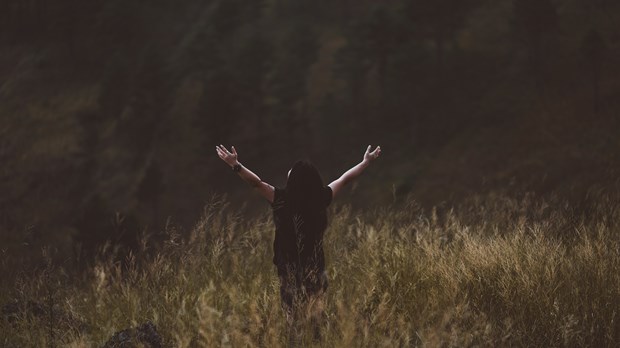 My mother's pale, gaunt face was transformed into wreathes of joy when I walked through the door of her hospital room. Although her eyes seemed sunken, they sparkled with the zest for life that is her own special trademark. With IVs dangling from her arms, she lifted her trembling hands to welcome me. I embraced her frail body, feeling the heat of her temperature and the protrusion of her bones through the thin hospital gown. She was unable to speak clearly, so I just patted her and sat down nearby. Within moments, she was asleep. And I was left to wonder, Why? Why does my mother's life seem to be ending in suffering and, at times, confusion? Why, after a life lived selflessly for others, must her old age be, in some ways, a curse?

Yet I was reminded that unanswerable questions are not restricted to any particular age group when my son recently went through a series of tests to determine his physical condition five years after cancer surgery. The whys buzz through my head like irritating mental insects: Why? Why is my handsome, six-foot-nine-inch, 32-year-old son still stalked by the shadow of this horrific disease?

During the times when you and I can't trace God's hand of purpose, we must trust His heart of love. While wrestling with the illnesses of my mother and son, a beloved young friend was entering into the living death that is divorce. Why? Why doesn't God melt the heart of the offending spouse and bring that person to genuine repentance so the marriage can be saved?

And once again, the angel of death has struck, this time taking the life of the beloved pastor who ministered to my family and shepherded me through my formative years. Why?

And before that personal loss, I had other "whys."

Why would God let 110 fathers of unborn children perish in the collapse of the Twin Towers on September 11, 2001?

Why would God withhold children from godly parents and give them to a mother who would bash in their heads with a rock or drown them in a bathtub?

Why would God allow thousands of people to lose their pensions because of greedy corporate executives who are padding their own retirement fortunes?

Why would God allow the kidnapping of babies and children for the perverted pleasure of some pedophile?

Questions in the Garden

Broken hearts asking the question Why? are as old as the human race, beginning with our first parents. What would it have been like to wake up the morning after having been banished from the Garden of Eden because of a very wrong choice? I would imagine Adam and Eve had been lying on the cold, hard ground, covered in smelly animal skins. After dark hours of fitful sleep, did they have a moment in between unconsciousness and full alertness when they thought everything they had been through the day before was just a horrible nightmare—only to come fully awake and face to face with the cold, hard consequences of their choice to disobey God? They would have found no comfort in each other that night after the way Eve had involved Adam in her sin—and Adam had blamed Eve when convicted of it. They may not even have been speaking to each other!

In utter loneliness, separated and alienated from God, their minds must have initially been preoccupied with reliving those awful moments that had led to their disobedience.

Why did I talk to the snake? Why didn't I pray first? Why didn't God intervene to protect us?

The most tragic day in all of history could not be relived. And the tragedy was not over. In the years to come, after the joy of giving birth to three sons, Adam's and Eve's hearts were broken once again as they buried their second son, who was murdered by their firstborn.