How can we find hope after childhood abuse? 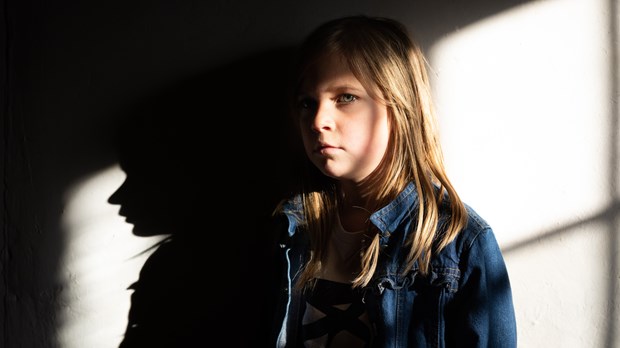 A: My father took things from me. After filling a supper plate for myself, sometimes my father would take it. Just as I was salivating at the smell of fried chicken or bean soup, he'd require me to give it up. And he stole my innocence when I was four, when he took me out to the half-picked cornfield in the big Nash and molested me.

I grew up on an Illinois farm where I learned to can corn, pluck chickens, and cut out weeds in the soybeans. However I also learned to trust no one, stuff my feelings, and tuck the family secret of my father's molestation into a dark corner of my mind.

At 20, just before I got married, Jesus took my hand. I felt safe with him, but I was afraid of his Father. He seemed a little too much like my father—distant, angry, powerful. I rejoiced in Jesus' sacrifice for me, but I didn't let him into my secrets. Until I had a baby, three years later, the childhood abuse stayed hidden.

In those early years of marriage nothing interested me, I didn't like myself much, and sometimes I couldn't get out of bed in the morning. I cooked meals and washed clothing, but dishes piled up in the sink and dust accumulated in the living room.

Twice in the two years after childbirth, I experienced not just depression, but much more serious mental illness, even losing touch briefly with ordinary reality. With much prayer and support from God's people, I recovered. But that experience and the stress of those years opened an opportunity for Father-God to give me a much deeper healing. God brought my father's betrayal into the light, and whispered to my soul, "Karen, you have deeply rooted weeds in your heart. Let me pull them." He began to pull the easier weeds first. But one day he exposed a deep, deep root: the distrust I felt toward him as my "Father."

I was 35 and had been suffering with terrible back pain for a while. Finally, I asked for prayer, and our church prayer team prayed for my back that included sciatic nerve pain down my right leg. We all praised God when the pain disappeared. I was able to return to work and my other activities. But three weeks later, the pain returned. And I was angry. I drove 40 miles to a quiet forest preserve to wrestle with God.

I trudged to the edge of a creek and uncomfortably sat.

"God, what is going on? Why did you heal my back for only three weeks?"

Crying, I wiped my nose on my sleeve. The cold wind stung my cheeks. In the journal I'd brought, I wrote: "You have all the power here. Why did you take the healing away? Why do it at all if you meant to take it away?"

I closed the notebook and spoke aloud: "God, you are not like my father." I stared at the gray trees across the creek. "But it sure feels like you are. Show me! I want to give up this anger. It looks like you use power whimsically! You create pain, and you heal pain. I don't understand."

I opened the book again and wrote: "Capricious. That's how it feels. But that's my father, not you. Transference. I still expect you to act like my father." My hands felt numb. I climbed in the car to get out of the wind. After rubbing my hands to warm them, I continued to write: "Intense hostility toward Dad for years and years is part of my character." I put down the notebook and leaned against the seat back.

Yes. I've been angry with him forever. In fact, I hate him, I thought. I leaned my forehead against the steering wheel. I'd never acknowledged hatred before. I'd dreamed it. But I'd never said it. And God has the same kind of power my father had. And like my father—he'll hurt me. It's only a matter of time. Yes, that's what it feels like. But that cannot be right.

How can we find hope after childhood abuse?