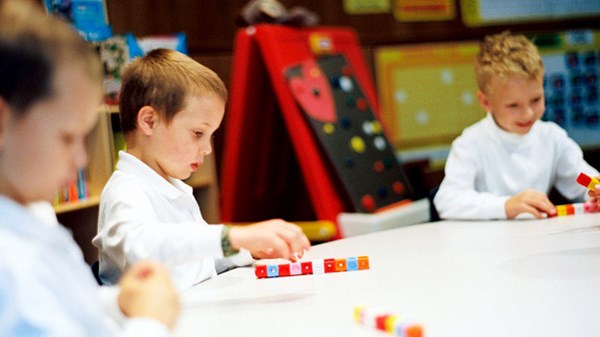 Finding your way to the brand-new Seattle Classical Christian School (SCCS) might prove a challenge if you aren't familiar with that city's downtown streets, where interstate on-and-off ramps merge with streets and avenues. On the day I visited the school, cranes were moving dirt on a nearby lot that jutted up against Interstate 5. The scene bore a striking resemblance to Ground Zero in lower Manhattan, where large construction machinery has become part of the landscape along the West Side Highway. After finding street parking and paying the meter, I made my way to the school, housed in Seattle First Presbyterian Church. As I walked, I passed two homeless men talking to themselves.

Such is the scene surrounding Seattle's first classical Christian school, which was exactly 11 days old when I visited. "Here are our students," said Will Little, 31, the president and co-founder. He pointed to four children in navy slacks and white shirts running around a sun room. ("They've just come in from recess," he explained.) Their teacher, one of two staff members, waved to me through the glass.

The decision to establish Seattle Classical Christian School downtown rather than in a surrounding neighborhood or suburb was a theological one for the school's board of directors. Little, a research scientist and software developer by profession, sees SCCS as a means of loving Seattle and helping it flourish. "My wife and I have a major calling to live in the city. We read Jeremiah 29 … We get it. We're in Babylon. Have some kids, plant some gardens, plant some roots." Focusing his efforts on the city is also a logical move for Little. "Cities are marked by density and diversity. Jesus loves people, so therefore, logically, Jesus loves cities. Here is where the culture is made. Here is where the nations of the world gather."

And here is where SCCS hopes to flourish. Little grows animated as he talks about "98118," a Zip Code south of the school, in Seattle's Rainier Valley. Little and his wife, Sarah, live in the nearby Central District with their three children, and one other family in the school does as well. But he is quick to point out that families throughout the Seattle metropolitan area are showing strong interest in the school, including a "tidal wave" of 3-year-olds who will, they hope, comprise much of the 2013-2014 kindergarten class. While the school currently has one combined kindergarten and first-grade class, the goal is to eventually serve grades K-12. The board will also seek accreditation from the Association of Classical Christian Schools, though that process will not begin until the school is a few years old.

A New Yorker and two fellow Seattlites informed Little's decisions to move his family to the Central District and start a school downtown: Tim Keller, Ray Bakke, and Mark Driscoll. "Keller has had the most influence on me by far," he says of the Redeemer Presbyterian church planter known for advocating that Christians be present in city centers as "a counterculture for the common good." Bakke founded International Urban Associates, has written books with titles such as A Theology as Big as the City and Street Signs, and is currently chancellor and professor of urban/global leadership at the Bakke Graduate University, also housed at Seattle First Presbyterian. Driscoll is the planter and pastor of the Seattle-based Mars Hill Church, which, along with its Acts 29 church planting network, strongly emphasizes city presence and engagement.

"Bakke said, 'Don't focus on building a great church, focus on building a great city.' That has really stuck with me," says Little. While most of founders of SCCS are members of Mars Hill (Little is a volunteer pastor at the downtown church, and Hartman's family are active at the Ballard location), "Appealing to a greater Christian audience is our goal. We're not trying to come down too hard and fast on any particular doctrinal lines. We're trying to keep to the core issues of Christianity. We're for Jesus. We're for the city. We're for saturating our children with the gospel. And we're excited about the classical method."

That said, planting at the city-center has not been convenient. In fact, the two biggest challenges facing SCCS might have been avoided if they had decided to establish themselves outside of the city center, where space costs less and is more readily available. "In any city, the cost and location are the biggest challenges."

The board of directors, which include Katie's husband, Nathan, Will's wife, Sarah, David Lance, and Lara Rickard, have been meeting for over two years, praying about how to establish a quality institution, while keeping it financially accessible. "Our aim is to allow anyone to send their children here, regardless of their income." To that end, SCCS has donors standing at the ready to underwrite costs for students whose parents would otherwise not be able to give them a classical Christian education. Thus far, funding for the school has come from the founders and a few additional individual donors. Little says that, apart from being housed at Seattle First Presbyterian church, "by design, the school is not officially connected to a church, in order to invite as many different people as possible to join."

Until this year, the nearest classical Christian school was in Lynwood, Washington, nearly 20 miles north of Seattle's city-center. Little hopes the school's location will provide access to students through Seattle, especially those whose parents work downtown. "We hope to raise city-savvy students with postures of servant leadership. We want them to ask, how can I seek the welfare of the city? How can I meet felt needs in the city? How can I look for ways to serve like Jesus in this city?"

Both Little and Hartman have a vested interest in the education being offered at SCCS. Little's 5-year-old son comprises one quarter of the current student body, and Hartman plans to enroll her 3-year-old daughter when it is time for her to start school. Says Little, "For my children specifically, I hope they would see sin and brokenness, broken shalom, and because they are created in the image of Christ, they would want to help restore that shalom, wherever the Holy Spirit leads them in this city." Little acknowledges that for some students, the path might lead them to public education, and he affirms that for some people. "As long as they are preaching the gospel, we are excited about that."

Prior to starting her family, Hartman taught for eleven years at classical Christian schools in Spokane and Redmond. She is a "big believer" in the way cultural engagement is imparted there. "Whether it's taking our fifth graders down to help at Union Gospel Mission or sending them off to college prepared for thoughtful engagement with their Philosophy 101 class, they're equipped students who are well spoken, thoughtful, and able to earn peoples' trust and be leaders."

As the first class at Seattle Classical Christian School wraps up recess, Little and Hartman express high hopes for SCCS's four students and those to come. "We may be raising four kids, but they'll go on to have kids, and they will have kids, and in that way, we'll be affecting generations to impact our city."