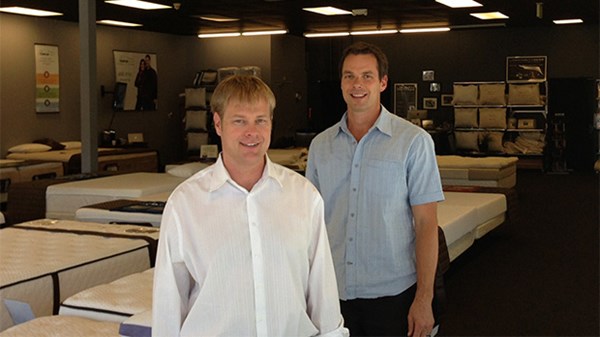 "This is one of the sleaziest industries in the world," says business owner Ethan Rietema. "Customers are treated so poorly. Stores beat you up, trying to get as much money as they can, but they couldn't care less if you get the right bed."

Rietema and Steve Van Diest, both former campus ministers, are bringing rest—and integrity—back to a business largely devoid of it. Four years ago, a Christian entrepreneur invited the Colorado natives to begin deploying their relational abilities in strip malls rather than on college campuses. They now co-own three Urban Mattress stores in Denver and have franchised four more. And, they argue, their current work is just as important as their former ministry.

Neither Van Diest nor Rietema was searching for a business opportunity, and they certainly never envisioned a career in mattresses. They wondered how to live out their faith in a "secular" environment, and had pastor friends question the vibrancy of their faith when they made the leap.

But then they started learning about bed sales in the United States. On average, they learned, people spend one third of their lives asleep. They began to discover just how much a good mattress matters.

"I don't have to do mental gymnastics with the product I sell," Van Diest says. "It's not a frivolous item. It's not an image-conscious product. People come here after being worn down by horrible sleep, replete with aches and pain. If we can provide them with a small glimpse of grace for a third of their lives, that's kingdom work. That matters to God."

Open in fast-paced environments like Denver, Austin, and Washington, D.C., Urban Mattress serves customers desperate for a good night's sleep. Van Diest and Rietema point to a wide swath of research illuminating how a good night's sleep increases weight loss, decreases stress, and broadly increases well being. They note God's institution of rest as an indicator of its importance. Since our Creator built Sabbath into his schedule, Christians should care enough to think about literal rest in a culture deprived of it.

"In our culture, a good night's sleep is a precious commodity," Van Diest says. "And we want to be the very best at providing it."

They often find their values challenged. Chief among their concerns are the many ways that consumers are swindled by industry leaders. It is normative, they state, for mattress companies to create unique product names for each store franchise, a tactic that prohibits consumers from comparison shopping. Mattress stores also consistently raise prices substantially before holiday weekends, then offer "blowout sales" that simply bring prices back to normal. And the typical sales approach is to badger consumers into buying as expensive a mattress as quickly as possible, with little regard to what the consumer wants or needs.

Urban Mattress, by contrast, offers consistent and fair prices that promote transparency and honesty. While Urban Mattress customers won't experience a "massive clearance" sale, they will find a fair-priced bed within their desired budget.

An elderly customer named Zoe, for example, came to their Denver store a few years ago in the midst of several debilitating health issues. Rietema sold her a bed while adhering to the Urban Mattress values. A few months later, Zoe returned to the store.

"She said, 'You treated me so kindly and with such dignity when I was sick, I'm putting you in my will,'" Rietema recounted. "She felt that because we treated her with such respect, she wanted to include us in her estate planning."

When Van Diest and Rietema entered business together, they were unsure how their careers in ministry would transfer. Their former job meant seeking out significant conversations with college students. What they found in their new career surprised them.

"The number one reason you walk into a mattress store is because you've experience a major life event. Perhaps it's a divorce or separation," Ethan shared. "Or, you're getting married, having a kid, sending a kid to college, moving, or someone close to you has died. I've been shocked at how often I have incredibly rich conversations with our customers and am given the privilege to enter their lives."

That's exactly what Kenn Kelly found when he walked into Urban Mattress. Cofounder of Never Settle IT, a custom software solutions company, Kelly and his fiancée (now wife) recently visited four other mattress stores before landing on Urban Mattress. Kelly suffers from substantial back pain, so the purchase was an important one.

"Even if we had to pay more at Urban Mattress—and we ultimately didn't—we would have done it because the service was so exceptional," Kelly says. "It was such a different experience from the other stores. It was like the service you receive at a fine restaurant. They served us based on our needs, gave us freedom to make our decision, and sold us a high-quality product. I've already told all my friends about it."

Employees also stand to gain from the Urban Mattress approach. From the moment a new employee joins the organization, Rietema and Van Diest give an enormous amount of leadership to their employees, expecting that "they will make our company better," Rietema says. "I don't need 'yes sir, no sir' employees. I need people who are going to make our company better by identifying and solving problems."

Eleven employees run their three stores, and over 30 employees work in the eight stores in the franchise. They invest daily in their employees—during what they've dubbed "Urban Mattress grad school"—and help apprentices launch their own franchises in their respective communities. This year alone, the apprentices—some Christians, some not—have launched new Urban Mattress stores in Austin, Washington, D.C., and Aurora, Colorado.

In 2009, Adam came on as a salesman. A self-described nomad who had spent the previous eight years working as a raft guide, Callaway came to Urban Mattress looking for a new opportunity. And he flourished, quickly building rapport with customers and championing the Urban Mattress values. This fall, Adam became an Urban Mattress franchisee; his first store opens this Christmas in Austin, Texas.

"I've always loved adventure. But I never would have expected to be an entrepreneur," says Callaway. "Four years ago, everything I owned fit into a Subaru. Now I own a business. We are really excited to bless our new community here in Austin."

Meanwhile, Van Diest and Rietema plan to launch eight more franchisees over the next two years. Their vision is to see these entrepreneurs become leaders in their communities by selling beds in a way that honors God and serves employees and customers alike. One bed at a time, Urban Mattress brings a restful shopping experience to an industry and consumer that needs it.

Chris Horst is director of development at HOPE International. He has written for This Is Our City about manufacturers in Denver, where he lives with his family. Chris blogs at Smorgasblurb, and you can connect with him on Twitter @chrishorst.