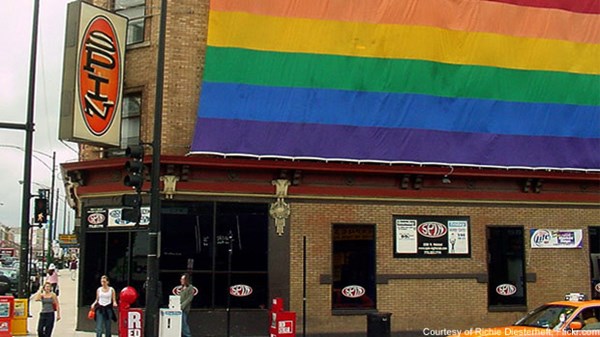 This week, we have highlighted the good work Christians are doing in Portland, Oregon, to eradicate sex slavery and serve trafficked victims. But this is not the first—or last—time Christianity Today has covered ministry to those trapped in the sex industry. In 2007, Jeremy Schneider gave us a "glimpse into the world of male prostitution" with "The Men of Boystown." "While working with Chicago-based Emmaus Ministries and studying hustler culture, I uncovered many of the complexities of male prostitution," wrote Schneider. "I am not an expert; I still have much to learn from the men with whom I've eaten hot dogs and walked the streets of Boystown. But I gleaned a few insights and experiences that have given me a far better understanding of the men who become victims in this subculture."

Emmaus has spent the past two decades reaching out to men in prostitution, a demographic marginalized even in the homeless community. Earlier this year, Emmaus announced that its founder, John Green, would be permanently stepping down as executive director (while remaining active in an emeritus, adviser role). Green is now director of Catholic Charities Community Services in Summit County, Ohio. Under the leadership of Jonathan Hancock, executive director since 2009, Emmaus continues to "build relationships of trust with these men, working together to help them get off the streets and to cultivate a life-transforming relationship with Jesus Christ."

The following section from Schneider's 2007 report focuses on how Christians are bringing the gospel to male prostitutes in Chicago. Yet the oldest profession on earth exists in every city, big and small. As you read this, ask: How are Christians engaging the victims of sex slavery in your own city?

" … the sometimes glamorous pretenses of hustling conceal a much darker reality. Many hustlers are boys who have run away from unstable home situations where there was physical, emotional, or sexual abuse, or where there were family conflicts over the sexuality of gay-identified youth. Research has shown a high frequency of hustlers who come from broken homes, homes with indifference or lack of affection, and hostile or abusive family members. One study in D.C. found that only 27 percent of young hustlers came from homes with both parents present; another national study found that only 18 percent had an intact family, and even when an apparently intact family existed, the relationships were broken. Most studies concur that fathers, more often than mothers, are either absent or ineffective.

It's not surprising, then, that poverty, homelessness, and mental illness characterize the lives of many hustlers. I remember meeting Kevin—he was so proud for finding an abandoned apartment to live in (instead of shelters and parks) with his transvestite hustling partner. We talked for at least an hour on a darkened residential side street in Boystown. Apparently he'd found a pretty nice building—vacant only because it was scheduled to be remodeled soon.

And then there was Brian. We first met on a Thursday night. He appeared feminine at first glance—tall and slender, with long hair. He explained that his mother was a prostitute and that he'd been raised by three women who were witches. He believed that he himself was a witch and simultaneously a born-again Christian. He had spent time in a psychiatric hospital and had attempted suicide at least twenty times (the scars on his wrists confirmed this), and yet quoted the Bible better than most of my Bible-quizzing youth group friends. Like many other men on the streets, he is in severe need of counseling and mental health services.

Along with these challenges, researchers and social workers are also concerned about drug use and disease in hustler culture. Drugs permeate life on the streets, and hustlers are no exception. According to Robert McNamara, a researcher in New York City and author of the book The Times Square Hustler, "Virtually every hustler uses some sort of drug, and many are poly-drug users." In Chicago, every hustler I met had to some degree battled substance abuse. Johnny talked quite a bit about the heroin recovery program he was struggling in. Hard drugs like cocaine and heroin are widely used among hustlers.

In addition to the risks associated with drug use, hustlers are also at a high risk for exposure to sexually transmitted diseases, including HIV—and most are strikingly unconcerned. In another study, Cudore Snell found that only 47 percent of his sample thought they "stood a chance of getting AIDS," though in reality nearly all of them were at high risk. McNamara also documented the prevalence of misconceptions about stds among hustlers, such as the belief that they can visually identify an infected client by whether he looks "clean" or "sick."

Furthermore, McNamara investigated coping mechanisms, including the disturbing reality that some hustlers, after learning of their infection, simply become apathetic, conceal it, and continue to hustle. Brian, for example, had AIDS yet didn't seem to fully grasp its meaning. Despite national campaigns during the 1980s to increase understanding of HIV/AIDS and to encourage precautionary measures, many hustlers remain uneducated in these areas.

I spent countless hours with hustlers on their turf. Despite all my reading and research on hustling, most of what I learned could never be concisely summarized in a report. Perhaps one of the most important lessons for me was the fluidity of the streets: While definitions and categories are important for structuring services and forming strategies, labels like "hustler" and "non-hustler" sometimes become blurred in reality. And I learned through friendships with men involved in prostitution that there really wasn't much difference between us. Incidentally—regardless of sexual orientation—it seems we all have a sin-orientation. And most import-antly, I learned that in the complex world of male prostitution, there is still hope.

Emmaus Ministries of Chicago is a living expression of that hope.

- The Men of Boystown, Christianity Today, 11/30/07. Click here to read the entire article.