7 Ways to Ignite Passion for Reading the Bible

We need to get back to the Book.
By Kathy Widenhouse 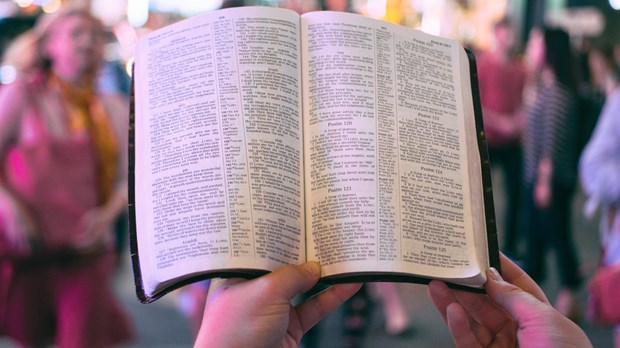 In Amazing Grace: A Vocabulary of Faith, Kathleen Norris recounts the story of a South Dakota rancher and his bride who received an expensive Bible as a wedding gift from his grandfather. They wrote a thank-you note and stowed the Bible away on a closet shelf.

As time passed, the grandfather repeatedly asked the couple how they liked the Bible. The rancher was confused as to how to respond. Hadn't he already expressed his appreciation? But the grandfather persisted. Eventually, the young man dug out the gift. As he leafed through it, $20 bills fluttered out, 66 in all—one at the beginning of Genesis and in each succeeding book.

While the rancher had left a monetary treasure waiting to be discovered, he had also left something even more valuable untouched between those pages: spiritual riches. All because he had not opened the Book.

In American homes the Bible has taken on the status of an icon with little practical value. When asked, "What book has most influenced your life?" in a recent Library of Congress survey, respondents awarded the Bible the top position. But only 34 percent of American Christians read God's Word on their own during the week, and of that group, only 13 percent claim to read it daily.

"Americans revere the Bible," says pollster George Gallup, Jr., "but, by and large, they don't read it."

Reading the Bible is not illegal here as it is in Laos. It won't lead to fines and imprisonment as it might in Vietnam. It doesn't cost a week's wages to obtain a copy as it does in the Philippines.

While we do not battle external obstacles to reading the Bible—such as laws or financial restrictions—we face internal barriers every day.

Perhaps you rank among the majority of Americans who do not read the Bible regularly. You've considered it, been exhorted to try it, and even attempted it a few times, yet you can't seem to make it a habit. What can you do?

If we truly believe that the Bible is divinely inspired and that it instructs us in righteous living and equips us for every good work (2 Tim. 3:16-17), then we should be eager to delve deep into it pages. Unfortunately, even though we understand intellectually that reading the Bible will help us grow spiritually, we can't quite seem to get around those internal obstacles. Here are seven excuses that prevent us from cracking the Book—and how to overcome them.

But we do have time—if we read in spurts. Unleashing Connection reports that in one year, the average American reads 3,000 forms or notices, 100 newspapers, and 36 magazines—but only three books. These trends suggest why the USA Today format is so popular. We like to get our information in short doses that are easy to digest.

Read just one chapter of the Bible each day, and in a month you will have completed the book of Proverbs (31 chapters) once or the epistle of James (five chapters) six times.

If starting "In the beginning" with Genesis seems too daunting, flip to the Psalms or Proverbs and start there. Or begin your journey in the New Testament with Matthew. You can also poll Bible-reading friends and ask them what their favorite book is—then try reading it. Or use a Bible with a built-in reading plan, such as The One-Year Bible (Tyndale House) or The Daily Bible (Harvest House). These devotional Bibles present Scripture in manageable portions and work through it in logical sequences.

7 Ways to Ignite Passion for Reading the Bible